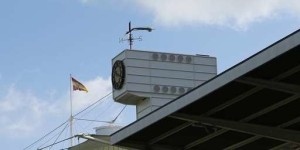 The Lord's weathervane, Father Time, was damaged during high winds in London at the end of March.

This is not the first time the weathervane has fallen foul of the elements: in 1992 it was struck by lightning and the subsequent repairs were featured on Blue Peter.