1 Time to get Tough on Thatch

Thatch is a widely used term, describing a layer of organic material in or near the surface of the playing area. Thatch is the build up of grass clippings, dead leaves and plant material including the root mass. However there are some benefits to having some organic material in the ground as well, humus is a rich source of nitrogen as well as providing a number of trace elements. It also has a high cationic exchange capacity, this means that nutrients are held on the surface of the thatch and can be exchanged with the grass plant. Thatch in the form of humus also bonds soil particles together providing cohesion and therefore stability. The type of organic material that isn't beneficial though is the detritus, or the woodier forms of the plant. Although not appearing particularly woody to us, the leaves, stems and roots contain lignins and these do not readily break down in decomposition.

Most playing surfaces suffer from excessive infestation of weed grasses, in particular Poa annua. As by its name suggests, Annual meadow grass is a plant with an annual life cycle, producing prolific amounts of seed during the season to ensure the survival of the species. It has a short clumpy growing habit of top growth and a shallow growing fibritious root system. Like all grasses, the leaves and roots are constantly dying back producing masses of organic matter. During the season this should include verti-cutting of the whole square on a weekly basis.Verti-cutting is a process of combing and grooming the grass, as opposed to disturbing the soil surface, it is what it sounds like, vertical cutting. A verti-cut machine is like a scarifier, but the blades are closer together and not designed to penetrate the ground. In an ideal world the blades should be set to be 2-3mm above the surface. But be careful, if there are local undulations, then you run the risk of scalping the sward.

Many Groundsmen and clubs may not have the luxury of a verti-cut unit so if the scarifier is the only option available, then lift the blade setting to a similar height of 2-3mm and this will help enormously with the control of thatch build up. Scarifying severely or too deeply during the playing season is not an option. Therefore general grooming and combing plus hand scarification on match pitches will maintain a manageable level of thatch.

In days gone by, we used to spend weeks of back breaking work using spring-bok rakes, these days all clubs should have some type of motorised scarifier/verti cutter and if a club doesn't have a motorised scarifier, there are grants available through the local county cricket development officer to purchase them. 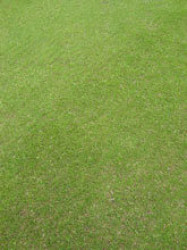 Often, the person in charge of the maintenance is worried about the severity of verti-cutting or removal of organic material, so to give some idea, verti-cutting a well maintained square, non match prepared, would remove one grass box of debris every three passes, so about four to five boxes per wicket.

At the end of the season, a far more vigorous operation of scarification can take place and this should be very severe. What you are removing is rubbish, moss, dead material, lateral grass growth, weed grasses such as annual meadow grass, and this alone will produce prodigious amounts of rubbish, maybe as much as nine cubic yards of debris off a single square. The square should look very sparse, even bare, leaving only the strong correct grasses intact and an ideal seedbed.

Is it so difficult to impress the point? Scarify the square hard, and if you think that you've done it enough, then do it again! The more severe the scarification, the better the germination and keying in of new dressings. The majority of Groundsmen seem to be frightened of the possibility of untold damage through 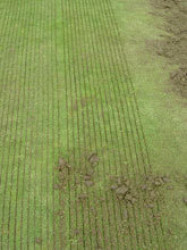 Thatch on or near the surface causes reduced air and water exchange into the soil; it retains excessive moisture encouraging the roots to stay near the surface and will lower soil pH. If the organic material isn't managed properly during the season and not removed properly at the end of the season, then subsequent top dressings cover the organic material and cause a buried thatch layer.

A buried thatch layer is a common cause of 'low and slow' wickets caused by a lack of historical maintenance. To resolve this problem, combined with the scarification, a program of regular aeration work needs to be employed at the end of the season, through the winter and into the early spring. 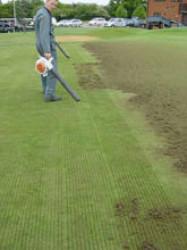 Following renovation and once the new seed has germinated; the surface should be damp enough to take a solid tine. A regularly aerated soil will help decompose organic material but this operation of aeration may also be combined with the use of a bio-stimulant program to speed up the process of breaking down the thatch. However if you are choosing to use a bio-stimulant program seek professional guidance.There are many stimulants on the market, each with their own claims. It is imperative that you know what organic material exists in that layer to know which group of organisms will successfully break it down.

Organic matter is an important ingredient in the soil make up, the release of nutrients back into the soil and the cohesive qualities of humus are very much of benefit. The build up of dead organic matter must be controlled before it becomes excessive to the point that play becomes impeded. 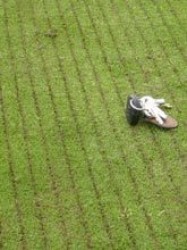 While working at the County Ground Northampton, David has achieved commendations from the ECB and has a reputation of preparing some of the finest pitches in the country. David also holds and manages many other roles within the industry. These include the role of Chairman of the First Class Groundsmen and also as a Trainer and Pitch Advisor for the ECB.

On seeing a demonstration of the Graden on a used, dry, hard championship pitch he was astounded. He quotes "When Keith Kensett called me to see if he could try the Graden on a cricket pitch I wasn't sure what the outcome would be? But following the demo and seeing how cleanly it cut in to the surface I knew I wanted one!" At Northampton David has used the Graden to achieve different goals. "The choice of three different blade widths allows me to us the machine for different processes. The 1mm and 2mm blades to control the sward and aid in pitch preparation and the 3mm blades to remove unwanted debris. This makes the Graden very versatile. Compared to all the other machines on the market the Graden is by far the best deep scarifier/aerator on the market".