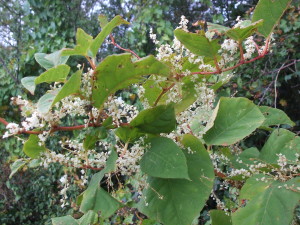 Tackle Japanese Knotweed at the right time to have the best chance of wiping it out, says Monsanto, which produces Roundup ProBio and Roundup ProBiactive 450, two of the most effective weapons in the fight against this invasive weed.

Timing is crucial in weed control, and never more so than when tackling Japanese Knotweed, says Monsanto.

Optimum control with glyphosate will be achieved from treatment from flowering in August or September but before die-back.

Monsanto Technical Development Manager Manda Sansom explains: "Treatment from flowering onwards is the most effective because the glyphosate is transported deep down into the underground rhizome structure along the natural flow of plant nutrients down for winter storage.

Japanese Knotweed is sensitive to frost so late season applications should be made in advance of the first frosts."

"In the spring, treatment is usually less effective because the plant is naturally pushing nutrients strongly upwards to the developing canes.

This can lead to a good initial top kill of leaves but less transport to the rhizomes.

Regrowth after early season treatment can often be stunted and distorted and because it is not actively growing it is more difficult to kill."

Treated plants take up to six weeks to show symptoms and plant material should only be removed when there is no further sprouting.

Re-spraying is only necessary if there are no visible signs of dieback after six weeks.

"I get more than 500 calls per year to our Roundup Hotline asking advice on how to control a specific problem weed like Nettles, Thistles, Ragwort, Horsetail, Ivy or Bindweed, but Japanese Knotweed is by far the most common," comments Manda.

"Calls often come from people who are alarmed by the invasion of a plant they had never heard of until they tried to sell their house, or whose land is being taken over by the weed from neighbouring land."

"Of the advice we give on Japenese Knotweed, the most difficult part for our callers to accept is to wait until the end of the summer before starting the treatment."

For more information visit the website: www.monsanto-ag.co.uk , contact the Technical Helpline on (01954) 717575 or e-mail us on technical.helpline.uk@monsanto.com