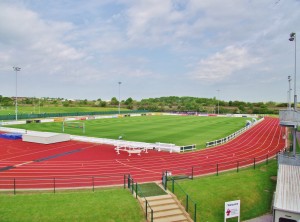 Gloucestershire and Stroud College (SGS) was formed by the merger of Stroud and Filton College South in February 2012. It has three main campuses plus a number of local community venues.

The College caters annually for around 15,500 full and part-time students of all ages with a range of sports orientated courses.

Nigel Hornsby has overall responsibility for the College sports facilities which means he has to have a wide knowledge covering a range of tasks.

For example, the natural pitch at the Stoke Gifford campus hosts the Women's football Super League where many of the matches are televised. "That means the stadium grass needs to deliver on a number of counts," says Nigel. "A consistent colour is important for TV, but for the players a tight well maintained sward is more critical."

Reseeding is an important part of Nigel's pitch renovation and he begins in the spring with scarifying, Verti-Draining and top dressing with as much as 60 to 100 tonnes of sand being applied ahead of reseeding.

However, as the stadium pitch carries fixtures for 11 months of the year (53 games last year) this work can be carried out as late as mid-summer depending on where the renovation window appears.

As to the seed used Nigel has trialled a number of mixes and believes decent results can be achieved from most mixes if the preparation is good. However, for him the best mix has proved to be the ryegrass based Johnsons Premier Pitch with iSeed coating. The latter was selected for the Stoke Gifford pitch to help get the seed off to a good start.

Nigel takes up the story, "Specifying the iSeed coating did not add much to our reseeding costs but the fast germination we achieved made the small difference worthwhile.

So when we came to select seed for our newly established rugby pitch we settled again on Premier Pitch, but this time without the iSeed coating in order to see if there was any appreciable difference.

It became very clear that this seed was not quite as quick to germinate as the iSeed coated alternative, although it still went on to produce a good sward and has performed as expected."

Having now worked with both standard and iSeed coated Johnsons Premier Pitch Nigel suggests it is well worth choosing the iSeed version where fast establishment is critical.

He sees the iSeed coating as offering key benefits when seeding in late spring and early summer and then again in early autumn.

The iSeed coating provides the seed with its own 'food cell' just when it is needed, boosting establishment ahead of what can be a stressful time for young seedlings.