0 To NEC or not to NEC, that is the question! 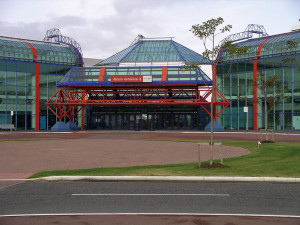 So, that's it. I read that Saltex is moving to the NEC, and in November to boot. It will be interesting to see how the move is received in the industry. Those I have spoken to are divided in their opinions. Whilst it's not exactly on my doorstep, it is just a short walk up the garden path, so to speak.

Perhaps this is the first step towards the 'One Show' that Pitchcare championed a few years ago. I do hope so, because I'm not sure my manager would let me go to two shows just a few weeks apart and, as things stand, my preference would be to go to Harrogate, although I may be persuaded.

I'd like to think that the IOG read all my chunterings about Windsor in this magazine and acted purely on them, but I doubt it somehow. Still, they had to do something, didn't they?

Talking of 'this magazine', I thought the last issue was a great read. My article was the best of course (insert smiley face)! Seriously though, I really enjoyed reading the Q&A with Neil Stubley at Wimbledon.

I had often wondered exactly what he and his team got up to after the Championship fortnight and he answered a lot of my questions. His views on the professional players was interesting also, regarding them as 'level headed'.

You could almost say the same about our first team squad, most of whom are from the UK, plus a handful from European countries.

Perhaps it's their 'Britishness' that keeps them that way. I'll give you an example. When the players returned for pre-season training, one of them had done an 'Ashley Cole'. By that I mean he had his hair fashioned in that strange 'let's try and look like a donkey' way. Needless to say, the banter flowed and, every time the lad touched the ball, the rest of the squad brayed at him. His new style has since grown out! You've got to love British humour!

I wonder whether it's the lack of British players in the Premier League that allows the foreign imports the opportunity to flaunt their hair stylist's talents so ridiculously?

Talking of growth, the stadium pitch looks great this season and I am confident that we will head into winter with the strongest grass cover I have ever seen, helped in no small part by the fantastic weather we enjoyed at the end of summer. Around here, it even chose to rain mostly at night, which was spooky to say the least.

I was at a machinery demo day the other week - a most instructive experience I might add - and caught up with one of my colleagues from 'up north'.

He was having a bit of a rant about minimum standards and how, when a club moves up the divisions, it's stadium has to meet certain criteria to comply with whatever league they are in. Yet, the same does not apply to the pitch and that, in most cases, the poor groundsman is left struggling on whilst everywhere else at the ground has money spent on it.

Now, I guess like a good many of you, I help out occasionally at a couple of local football clubs. I don't 'commit', because that might encroach on my day job, but I do help out with marking out, when asked, and can sometimes be found sat on an ageing ride-on mower when the grass gets too long after bad weather.

I have to say that the state of both pitches are shocking and, for a professional groundsman, linemarking over mud is a very depressing exercise. God knows how the kids feel playing on it every weekend. The only talents they can express are in mud wrestling and treading water!

Perhaps my colleague has a point when he talks about minimum standards for winter sports pitches.

Keep the faith; and keep cutting the grass, after all, that's all you do!