1 To the Manor born 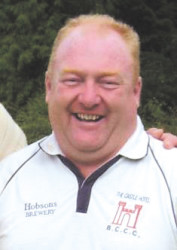 The Manor Ground, home of Bishops Castle Cricket Club, is situated on the Shropshire/Wales border and is, without doubt, one of the most picturesque grounds in Shropshire Cricket.

The first recorded cricket in Bishops Castle was in 1841, but the club was formed in 1896 at the Six Bells Public House playing at various grounds in the Town including Oak Meadow and Love Lane, before moving to its present home at Lydham Manor in 1946, the ground being owned, as it still is today, by the Sykes family. They had previously used the ground as a private cricket ground to play various invited teams and players between the world wars.

The Club were one of the most respected in Shropshire Cricket throughout the 1950s and 1960s, so much so that they were approached to be a founder member of the Shropshire League (now the Proactive Shropshire Premier) in 1969.

But the then Committee turned the chance down, a decision that would have repercussions in the 1980s when the Club reached a very low ebb, before a resurgence saw them join the Shropshire League Division 5 in 1993 - at two weeks notice! They set a still standing League record on their debut, bowling their opposition, Guilsfield, out for 11. Various promotions have followed and, this year, they competed in Division 2 of the seven Division League for the fifth successive season. Also, this season, the club ran a 2nd XI for the first time competing in Division 7 of the Shropshire League.

Bishops Castle also run a Sunday side, Under 11, Under 13 and Under 15 sides and kwik cricket for 11s and under. The club have four ECB coaches and they also foster excellent links with the local primary school and community college. This meant that in 2007 there were over seve

nty matches played at The Manor.

The ground is kept in shape by Groundsman Stephen Morris who has looked after the Manor Ground since 1985, having started playing with the Club in 1977 (and still on 1st XI duty in 2007!!). He dedicates, on average, fifteen hours a week mainly over a period of 25-28 weeks every year. Stephen is ably assisted with machinery maintenance by Gerald Jones, who has been involved with the Club for over twenty years and also, at busier times of the season, by various other volunteers.

The square at the Manor was first used by the Club in 1946. It has no drainage system as such but does have a slight slope from top to bottom which can help with excess water on the square. The square has eight natural turf pitches - six senior, one junior and one for use with the mobile net which was purchased last year.

Because of an extreme lack of finances in the mid 80s, there was very little in the way of a budget for the maintenance of the ground. It was a case of it breaks raise some money and fix it. Up until 1999 the outfield was cut with a set of trailed Ransomes gangmowers, borrowing a tractor off Gerald's father who is a farm machinery supplier.

The square has not been top dressed in all the time that I have been groundsman (originally due to lack of funds), although the last three seasons I have used Kettering loam (from GSB Loams) to repair the bowlers' footmarks, which has been very good. This must mean we are very lucky with the soil composition of the square. Over the last six seasons there has been a run rate of 3.75 per over (so, per 100 overs an average of 375 runs).

At the end of the season we aerate the square with a manual Sisis solid tine, and then scarify fairly aggressively. We then overseed the square using a basic ryegrass which seems to do the job. This year the growth and density of grass has been as good as at any time previously. Last autumn we also spiked the outfield with a tractor trailed solid tine spiker which seems to have had a good effect on the outfield.

We also scarify fairly aggressively before the start of the season, usually a number of times, and also a number of directions, collect the debris with a rotary mo

wer then cut with the cylinder mower to finish.

The square and pitches are cut using a 20" Atco Royale purchased in 2007. This is fitted with a 10 blade cylinder and we finish the wickets with a Suffolk Punch 17". This season we have also purchased a Mountfield S38 scarifier which is used on a regular basis in preparation of pitches, a task that was previously done by hand raking and brushing. The square is also dragmatted as often as possible.

The outfield is cut using a Mountfield M Triple unit which is at least fifteen years old. The three acre ground can be cut two ways in about 1¾ hours. During the busiest times the outfield will be cut twice a week (both ways). The club will hopefully be replacing the Mountfield for the 2008 Season!

As such you could say that our square is organic in construction, because we use no fertilisers or any growth stimulants. I tend to aerate the square on a regular basis and moss seems to stay away.

Even though the square is on a slight slope, with the amount of rain we had in June and July (recorded as 13 inches in a 22 day period) even we suffered from a waterlogged square. But, obviously, being on top of a hill the square does drain very well and, even though in one particular week this summer the square was waterlogged on the Thursday lunchtime, the Saturday League game still managed to go ahead !

Until 2003 the club did not possess running water so, in dry spells, this could be hard work, but somehow we managed. Now we possess a new irrigation system with a new water tank with a pump installed in our pavilion which has improved the water pressure immensely resulting in a pressure of 2.5 to 3 bar which is sufficient to water the square with various sprinkler setups and also to hand water the pitches in wicket preparation. We do not possess wicket covers.

Rolling of the square usually starts about the last week of March (weather permitting) with the lightest of the mowers (Suffolk Punch), then progresses to the heavy mower (Atco) followed by the push roller and then, when the correct conditions prevail, the Stothert & Pitt 32R on quick speed then likewise when conditions ar

Being in a rural area we do sometimes suffer with moles, rabbits etc, but not that much over the last 2-3 years.

Once the season is up and running I usually try to prepare as well in advance as possible, most of the time having two wickets in some form of preparation. I start by lightly scarfiying with the Mountfield S38 then mowing with the Atco and then cutting with the Suffolk Punch until there is as little grass as humanely possible. I also hand rake at intervals to lift the grasses and, when cutting the square, never cutting in the same direction every time so as to not create a 'lean' in the sward. Every other time I cut across the square as well as in pitch direction.

I will usually roll for thirty minutes Monday-Thursday then for forty-five minutes on Friday and then, if needed, thirty minutes on Saturday morning, or if not needed, I use the push roller to give the wicket a 'finish'.

As many games as possible have to be 'got' out of a wicket, but I will usually use the same one, Saturday, Sunday and midweek and then a 'new' one the following home game if it is Saturday.

I am qualified with the IOG Basic level A and B but it is, without doubt, working with an area of ground over a timespan of twenty two years with no formal training (i.e. got dropped in it so to speak) that has helped me get the quality of ground that we possess now. Playing highlights have been the visit of Wellington CC in 2005 and the then ECB Birmingham Premier League Champions in the ECB National Knockout.

Also one thing that a lot of groundsman find is that recognition is a bit thin on the ground with regard to their efforts but, this year, I was awarded 'Volunteer of the Year' by South Shropshire District Council.

Over the last eighteen months we have also completely redeveloped our pavilion which has cost about £25000 so far, so you would have thought that any chance of new machinery would have been remote to say the least, but with all the work that the members of the Club put in to fund raising with lots of events throughout the year it is still possible. One problem we had was that the development of the pavilion caused us to lose part of the outfield to bury 300 metres of armalite electric cable when the club installed electricity in 2006

But, working on such a facility in the superb surroundings that we possess is just reward in itself, with the Welsh hills one way, the Stiperstones and the Longmynd to view, sitting on the roller ain't such a bad job.

Having had no formal training myself, the idea of the Pitchcare website and magazine must be a Godsend to people like myself, with all the knowledge provided by the vast pool of experts who are only too happy to provide advice to anyone who needs it.