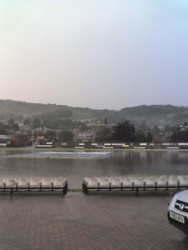 Todmorden groundsmen Nevil Sutcliffe and Richard Crossland had seen nothing like it as a violent thunderstorm flooded their ground to a depth of more than a foot.

In fact the West Yorkshire town was the wettest place in the United Kingdom that day with 3.45 inches recorded on Sunday, July 2 when Todmorden's ground disappeared under the water.

Not surprisingly, the club had no option but to ask Yorkshire to call off two county second team one day matches against Derbyshire and Leicestershire respectively on the following two days.

Nevil and Richard said: "The rain came at 5.20pm - we were in the second innings of our Lancashire League match and we thought we had missed it as everyone else in the league had been off the field long before us, but it came and swamped us. We were told we had one and a half inches of rain in a hour.

"We stood waiting to put the covers on while the game was ongoing and we took our drinks with us.When we had finished our drinks we put the pint glasses on a ledge by the sightscreen and when the rain stopped at 9pm the pint glasses were three quarters full. The local paper reported we had had one and a half inches in 15 minutes.

"We have never seen rain like it and last as long. The ground has a natural slope on it and we realised that once the water got on to the square the following day's game was off. In fact, the covers were floating after all that rain.

"The following morning the water had gone and people were arriving at the ground not realising there would be no game. The first two of them were from Nottingham. They walked around the ground looking for a cup of tea not realising there was anything wrong with the playing area. We could have probably played on the Tuesday but it would not have been fair not to inform Yorkshire on the Sunday night. 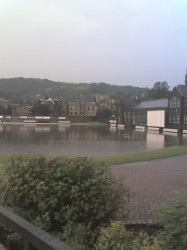 Todmorden is a popular ground with Yorkshire members, who flock there for second fixtures and, because it is so close to the Lancashire boundary the Red Rose county also use it for matches. In fact, Lancashire will play Yorkshire there in a three day match from September 6 to 8.

The groundsmen report a steady improvement in their square thanks to an ongoing programme of work.

They say: "The pitches have been getting better and better. It would have been a superb pitch had we managed to play the two county matches.

"We have followed an ongoing programme on advice from the Sports Turf Research Institute and the pitches improve every year. They get a little quicker with a little more bounce and carry. Many years ago they were slow and easy paced and the ball would have kept low.

"Now, we have an ongoing programme of dressing with Surrey loam after the advice we have been given. We have a lot more grass cover than we used to have. We have a programme of top dressing, fertilising and scarifying using nitrogen and phosphate - 800 nph at the beginning and end of the season and two dressings of 806 nph at six week intervals during the season.

"We also apply a seaweed tonic every six weeks all the year round, which helps the fertiliser process and gives the grass a tonic through the winter."

One method that has proved beneficial is deep verti-tining on the square at the end of the season. After top dressing, the Todmorden groundsmen spike holes in the ground to a depth of five inches, which ties the top dressing to the root system. They used to do overspiking with a barrel spiker, but the results were detrimental. The top three or four inches used to separate and they ended up with a plywood or layering effect, which meant that when the ball pitched the downward pressure went down three inches and then dissipated sideways giving low bounce. Now the square is completely solid to a greater depth and they achieve more bounce. They also noticed a marked improvement in winter drainage as there was less standing water on the square in wet periods - more disadvantages than advantages.