Everton Football Club have recently moved from their former training ground at Bellefield, built back in the 1960s, to a moderrn £14 million training complex at Finch Farm in the Halewood area of Liverpool. Kevin Marks visited the club for a tour of the new facility.

I arrived at Finch Farm on a bright early spring morning in pessimistic mood because, in the previous five days, this Premiership club had been knocked out of the UEFA Cup and lost away to Fulham.

I expected to be met by doom and gloom but, while waiting in reception, I bumped into an old acquaintance, Jimmy Martin, Everton's Kit Manager, who greeted me in his customary 'scouse' manner, in terms which could not possibly be printed in this magazine! 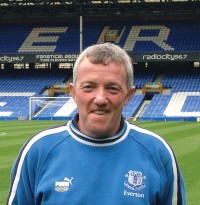 Jimmy lightheartedly claims he runs the place and, after establishing that I was meeting Robbie Gillespie, the Deputy Head Groundsman, he was on the phone to get him across from the groundstaff's facility to meet up with me.

While walking back across the car park, Robbie explained that David Moyes's senior squad made the permanent switch from Bellefield in October last year and were then joined by the Everton Academy players and staff early in November. He told me that it's the first time the senior squad and the entire Academy set-up have been housed in one location.

Robbie reports to Bob Lennon, Everton's Head Groundsman since 1988, and manages a team of seven at Finch Farm. The former 55-acre strawberry farm is undoubtedly one of the finest training facilities in Europe and features ten grass pitches, one of which is floodlit, along with an additional floodlit synthetic pitch and specialist training areas for fitness work and goalkeepers. It also has an exact recreation of the club's stadium pitch at Goodison Park.

Inside the training complex there are extensive facilities for both the senior squad and the Academy players, including a modern gym with high-tech equipment operated by a memory card encoded with each individual player's fitness schedule. There is also hydrotherapy pools, a spa, sauna, physiotherapy rooms, a media centre and a video lounge including a video editing suite. Completing the facilities are changing rooms, administration offices, separate restaurants for the senior squad and Academy players and a 70 metre x 40 metre synthetic indoor training pitch. 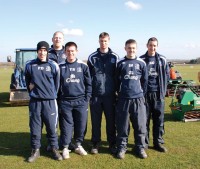 Normally, the groundstaff are the 'forgotten few' when it comes to facilities and can often be found in poor, shabby premises which are obviously an afterthought. At Finch Farm the first building you see on entering the complex is the groundstaff facility. Impressively modern with drying room and showers, it contains an eclectic mix of equipment for managing this huge complex.

"We were involved and consulted right from the beginning of the project back in 2006," said Robbie. "Bob Lennon had considerable input at the planning stage and it's paid off. In hindsight, it would have been good to have had a slightly bigger building, but the facilities overall are excellent."

Bob Lennon has a longstanding relationship with Burrows GM, the Ransomes Jacobsen groundscare dealer located at Leyland near Preston. As you would expect there's a predominance of orange equipment, most of which is new, and includes two Jacobsen LF3800 ride on five cylinder mowers, a Jacobsen Tri-King, two Ransomes Mastiff 36" walk-behind mowers, a trailed Turfco WideSpin 1530 topdresser, two Iseki tractors and an E-Z-GO MPT utility vehicle for running around the site.

Other equipment includes a John Deere Aerocore, a Kubota B1550 compact tractor, a Wiedenmann XF 1.6 deep aerator, a Spearhead flail, a selection of Mountfield and Hayter small rotary mowers and a Wessex brush for the two synthetic turf pitches.

Mallinson's of Ormskirk were the main contractor for the grassed areas, while Kier Construction were responsible for the erection of all the buildings.
"It took around 150 weeks to complete the site," added Robbie, "including pitch construction and landscaping. The 1st team show pitch has under-soil heating and is the same specification as that at Goodison. We have 550 Rainbird sprinklers across the site and the irrigation system takes water from a specially constructed pond fed by a borehole and also filtered waste water from across the complex.

"Ten grass pitches might seem excessive but this facility supports a large number of teams. We have two Academy teams at under-18 and under-16 level playing every second Saturday and, at Scholar level, we have teams in all the age groups from under-7 to under-14, who play on Sundays.

Our under-15s play mid-week. Add to this the training regimes for the senior squad and Academy and you can see the high demand on our natural grassareas. With this number of pitches we can rotate as necessary and manage the turf to ensure that we provide the best possible playing and training surfaces at all times."

After touring this impressive complex, I met up with Robbie's boss, Bob Lennon, and asked him what Finch Farm meant to the staff working here.

"Undoubtedly, we are justifiably proud of the facility we have here. Bellefield was ground-breaking when it was developed in the 1960s but times have changed and, in this modern era, it was vitally important to ensure we had the very finest training complex for all of our teams."

"From my point of view, I'm delighted with the facilities we have. All my team are now at one site, unlike previously with some at Bellefield and others at the old Academy in Netherton. We have a good range of equipment and excellent support from our local dealer, so we can provide the level of maintenance that this complex demands."

Before writing this article, I visited the Everton website and I think a fitting conclusion is echoed in the words of Everton's CEO Keith Wyness. "Everton has always been a club intent on innovation and moving forward. Being able to now boast one of the most advanced training facilities in world football maintains that tradition and further underlines our determination to continue the great progress made on and off the field in recent seasons."

Bob Lennon and his team are an integral part of this!