by External source
in Obituary, People, and Cricket
on 04 Jul 2020 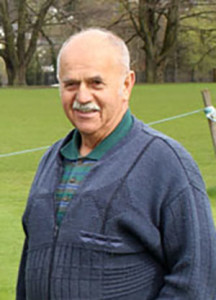 It is with great sadness that we learn of the passing of former Durham County Cricket Club Head Groundsman, Tom Flintoft.

Returning to his native North East having spent a period of time as Head Groundsman at Hampshire County Cricket Club, winning many awards throughout his career.

Tom was in charge of laying the square at Emirates Riverside following Durham becoming a first-class county and became a highly respected groundsman on the county circuit.

Our thoughts are with Tom's family at this sad time.

A tribute to Tom from Durham Cricket Board Chairman, Bob Jackson

There is no doubt that Tom Flintoft was one of the most popular recruits that Durham made nearly thirty years ago. Coming back to the North East from a spell at Hampshire proved ideal for Tom and his wife Mary, although the job that Tom took on was probably different to and bigger than, the one which he anticipated and challenged his love for cricket in the area and the people connected with it.

His knowledge of many of the cricket clubs from Whitby to Whitburn,the people and grounds around them, proved to be invaluable as Durham had to bring several grounds up to speed for First Class cricket in the initial years and also bring together another group of clubs who were keen to host second team games.

This was a big enough job without the incredible responsibility of creating a future Test Ground at Chester -Le Street. Not only was Tom needed to provide the scientific input to the pitches but all of the groundsmen were desperate to improve their own knowledge and Tom was the source of this. Not only did he support those clubs involved with hosting First-class and Second team matches, he found the time to advise numerous club groundsmen.

When requested equipment was also an essential part of the upgrading of the grounds and it fell upon Tom to spend the sizeable budget that Durham had to commit to, He saw that as very much one of the perks of his appointment!

He did this very fairly without any favouritism and so enjoyed huge cooperation from all clubs because of the lovely combination of humour, friendliness and a willingness to get his hands dirty.

Durham is indebted to Tom for his magnificent part in their short history.