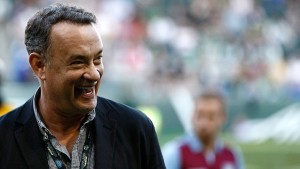 Actor Tom Hanks has added his voice to those protesting the artificial turf surfaces that Canadian venues will use at the upcoming 2015 FIFA Women's World Cup in Canada.

"Opinion: Women's World Cup is the best Soccer of the year," Hanks tweeted to his 8.73 million followers on Friday. "Hey FIFA, they deserve real grass. Put in sod."

The use of turf at all six Canadian venues for the upcoming major tournament has been a contentious issue for some players, including American stars Abby Wambach and Alex Morgan. A group of 40 international players recently sent a letter to FIFA and the Canadian Soccer Association threatening legal action, arguing that requiring women to play on artificial turf is discriminatory.

The letter claims that no men's World Cup final has ever been contested on an artificial surface.