by Football Foundation
in Football and Synthetics
on 28 Jun 2018

Tom Watson, MP for West Bromwich East, was delighted to receive an official tour of George Salter Academy's two third generation (3G) artificial grass pitches (AGPs) and other sports facilities recently (Friday 22 June). The new playing surfaces were made possible by a grant from the Premier League & The FA Facilities Fund, which is delivered by the Football Foundation. 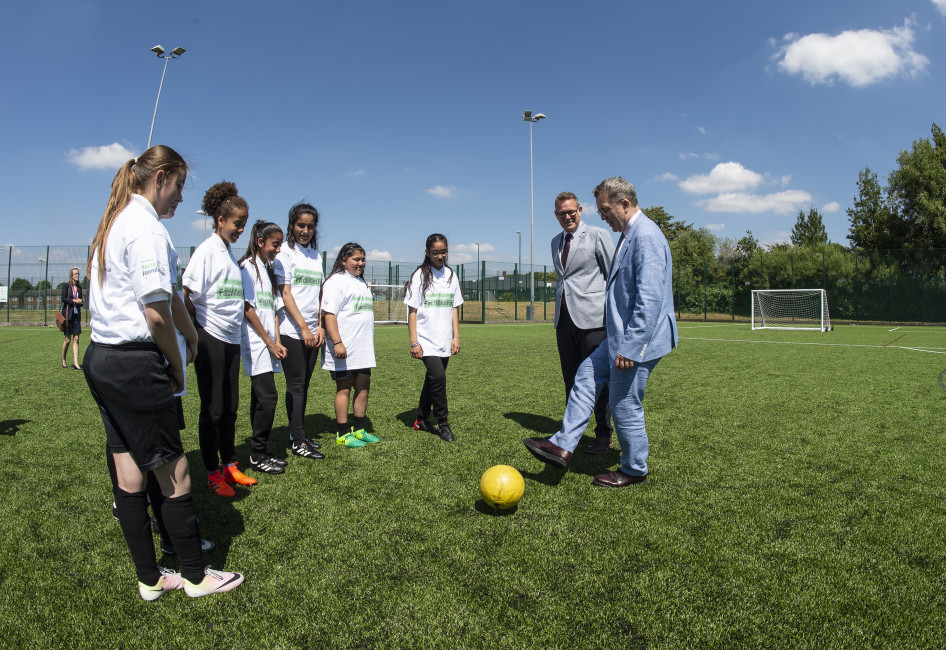 Staff and pupils at George Salter Academy, including the school's Principal, Adrian Price, welcomed Tom Watson MP for a tour of their state-of-the-art pitches recently - with a number of students taking the opportunity to show off their skills.

The investment helped George Salter Academy to install the state-of-the-art pitches, which were officially opened by the Deputy Mayor of Sandwell, Cllr. Susan Eaves, in November 2017. The new playing surfaces have replaced the school's existing sand-dressed artificial grass pitches, which had fallen into a state of disrepair due to their age.

The new all-weather facilities are in addition to the Academy's two grass pitches, which also benefited from the Premier League & The FA Facilities grant. The project included surface and drainage improvement works for the full-size pitch and 9v9 pitch on-site, in addition to upgrading the 3G AGPs.

The project is already benefiting a number of users, not least of which is the Academy's own pupils. Students and community members can take advantage of outreach sessions, such as Premier League Kicks, delivered on-site by the Albion Foundation - the charity arm of West Bromwich Albion FC.

Other users include the school's two partner clubs, Tantany Lions FC and Greets Green Albion FC. Birmingham FA is also using the site for a range of sessions such as Safeguarding and Emergency Aid courses. The project has helped the school to provide the local area with state-of-the-art playing surfaces and users are making the most of the improved scheduling flexibility.

George Salter Academy were awarded a £462,000 grant from the Premier League & The FA Facilities Fund towards the project. The school also contributed £100,000 to the project, and were supported in their funding bid by their sponsor, Ormiston Academies Trust.

Birmingham FA and the Football Foundation helped the Academy to develop a five-year Football Development Plan, setting out a vision for grassroots football and improving participation on-site.

The school's previous facilities were already in high demand before the project, and the improved reliability of the all-weather pitches will support 14 new teams being introduced in the next five years. This will result in a 150% increase in overall football participation on-site.