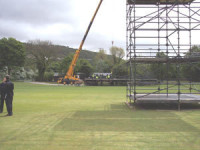 Pontypridd's most famous son drew around 20,000 fans to Ynysangharad Memorial Park, in the town's centre, at the end of May, for a homecoming concert, which marked the star's first major appearance here since he became internationally known.

According to Martin Sullivan, Outdoor Parks and Amenities Officer for Rhondda Cynan Taf Council it wasn't the crowds that did the turf damage, but the construction and de-construction of the imported American stage. "Steel decking was laid onto the field as a track-way for the huge crane employed to construct and dismantle the stage," he explains. "Due to the weight of the crane, (approx 20 tonne), once the event was over and the decking was lifted, we were left with a 50 mm depression over the surface area with severe compaction and water logging."

Sullivan, who had anticipated this kind of damage prior to the event, had already booked Suffolk based Terrain Aeration, who came in with the company's Airforce machine, to administer deep, compressed air de-compaction treatment 12 days after the concert.

"Our brief was to treat the sunken grass and as much of the rest of the adjacent football pitch as possible in a day," recalls Terrain Aeration's M.D. David Green.

Working at 2 metre spacings to inject compressed air one metre down causing fractures and fissures to break up the soil, Terrain's Airforce machine was at first, hampered by the presence of boulders lying at about 250mm below the surface. "Progress in these adverse conditions was abysmally slow," admits Green "with the power of the JCB hammer absolutely essential to make any progress whatever into the subsoil. Once full penetration to one metre depth was achieved there was suitable soil movement when the air blast was fired."

Fortunately the boulder layer was restricted to a strip, approximately 8 metres wide, after which it petered out into heavy clay. Once Terrain reached this point, the work rate increased 5 fold. 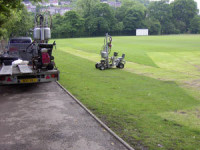 "The field dried out in 3 days," confirms Sullivan. "We had good weather and our cricket outfield was back in play immediately. We're hosting three major games for the Ladies European Championship this summer, and we're looking to bring the football pitch back into play in late August in anticipation of our first friendly which will probably be around 1st. Sept."

Having foreseen the adverse effects of this concert and acted accordingly, Sullivan will not think twice about repeating the performance. "We now know that any further concerts or events of this nature will require similar aeration treatment after the event," he confirms.

For further information on the deep, compressed air de-compaction treatment offered by Terrain Aeration, contact the company on Tel: 01449 673783 or visit their website at www.terrainaeration.co.uk