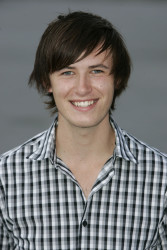 Tom Peirce has been announced as the 2009 winner of the Wembley Stadium Turf Scholarship.

The 19-year-old from Dunstable in Bedfordshire has become the third winner of the prestigious scholarship scheme, which is sponsored by Toro and Lely UK and sees a promising young turf professional win a six-month stay at the world-famous stadium.

Tom is a student at Hertfordshire's Oaklands College in St Albans, chosen as Wembley's exclusive education partner in the scheme because of its close proximity to the stadium. He says the prospect of winning motivated him throughout his course. "When I first heard about the chance to work at Wembley I was really encouraged to work hard to gain my qualifications in hopes I might win the scholarship," he says. "I'm ecstatic that my hard work paid off and can't wait to join the team and develop my skills."

Tom won this year's scholarship after being put through his paces at a judging day held at the stadium, also attended by his fellow finalist, 17-year-old Callum Baxter from St Albans. Both were asked to give a short presentation on their academic achievements before being interviewed by a judging panel consisting of Wembley Stadium's grounds manager Tony Stones, senior human resources advisor Shirley Bronks and groundsman Karl Standley together with Lely's Toro general manager Peter Mansfield.

Tony says Tom's enthusiasm and professionalism shone through. "Tom showed great knowledge of groundsmanship and events that are held at Wembley," he reveals. "He has a proven track record working at a local golf course where he has gained knowledge in greenkeeping and wishes to further his career in stadium sport and especially expressed his desire to work at the biggest stadium in Britain. While at Wembley he can gather knowledge on a wide range of sporting events, including not only football but also rugby and American football. He also has great experience working as part of a team, which when added to his previous experience working unsociable hours would be a huge benefit to the team."

Tom started work at Wembley Stadium on 1 September. This year sees the scholarship condensed to six months to ensure Tom experiences maintenance of the pitch at its most demanding. Spanning pitch maintenance and renovations throughout the football season, Tom will also help with preparations for the major rugby and NFL matches also held at the stadium, cramming the equivalent of several years' turf maintenance experiences into his stay. He will also spend one day a week continuing his studies at Oaklands, before the scholarships ends in spring 2010 when the stadium's concert season commences.

The Wembley Stadium Turf Scholarship is a unique training opportunity open to young student groundsmen living in the local area. The scheme was established in 2007 by Wembley Stadium and is sponsored by turf maintenance equipment manufacturer Toro and its UK distributor, Lely UK, in association with Oaklands College in St Albans, Hertfordshire.

Wembley Stadium is committed to the development of young people and working closely with the local community and so this opportunity is open exclusively to turf students at Oaklands College, which was chosen as the stadium's educational partner in horticulture because of its close location.

All students currently studying for the college's City & Guilds National Certificate in Horticulture specialising in Sports Turf Management can apply for the scholarship. The college then selects a shortlist of students to go forward for a judging day held at the stadium after which the successful candidate is appointed. This year's scholarship began on 1 September 2009.