0 Ton up for Perth 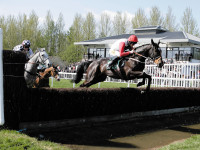 A special race meeting was held at Perth racecourse at the end of September celebrating 100 years of horse-racing at Scone Palace Park.
From hosting just two day's racing each year until 1947, Perth Racecourse now holds meetings throughout the spring and summer, closing its season with the Glorious Finale in September.

Unusually for a National Hunt course, Perth Racecourse does not hold meetings during the winter - the high water table of the nearby River Tay renders ground conditions unsuitable for racing. But summer jump racing brings its own headaches for the dedicated ground staff, who are often found burning the midnight oil moving irrigation equipment to ensure good, safe jumping ground.

Trainers appreciate this which is one of the reasons why, in recent years, Perth Racecourse has gone from strength-to-strength.
Increased attendance, sponsorship, betting turnover and on-going course improvements are reaping the benefits of better facilities, bigger fields and a better quality of horses competing for increased prize money.

The unique atmosphere at Perth - the most northerly of Britain's 59 racecourses - resulted in a number of awards and accolades, including the 'Best Small Racecourse' award for racecourses in Scotland and the North East of England four times in the past six years, judged by the Racegoers Club; and it is one of just eleven UK racecourses to be given a Gold Standard Award by the Racehorse Owners Association; and is rated by The Racing Post to be among the top six courses in Britain and the highest ranking in Scotland.

Head Groundsman, Donald Dow, probably knows Perth Racecourse better than anyone else, having notched up thirty years of service.
A 'stop gap' job for a local lad after leaving school has turned out to be a labour of love for Donald, even if it means burning the midnight oil to get everything right for the valuable thoroughbreds which race over his carefully tended turf.

"Everything is geared around the safety and welfare of the horses nowadays," said Donald. "All the facilities here have improved tremendously over the years and the trainers appreciate that."

Donald's plan after leaving school was to work for a local joiner but, at the last minute, he was told the job wasn't available.
"My father worked for Colonel Dewhurst, who was chairman of the course, at the time and he asked me if I was interested in working at the racecourse.
"My first three months in the job were not great because the head groundsman was not very nice. I wasn't keen to stay, but then he retired and the new man and I got on very well."

Donald could be forgiven for running a mile if he sees a paintbrush and can of white paint: "All the railings used to be wooden and had to be painted every season. Now we have the latest uPVC railings and crowd barriers which are maintenance free."

He explained how his turf management regime has become much more intensive and technical these days: "Thirty years ago the track was only fed once a year, now it's every four to six weeks and, where we used to cut once a month, it is now three times a week from April to September."

Perth Racecourse has a modern irrigation system, but knowing when to use it can be very tricky. "I'm always having a battle with the weather. We regularly phone for forecasts but they're often wrong, so one of the hardest parts of the job is judging what is going to happen with the weather."

The groundstaff's job has also intensified with the increase in the number of race days. "When I started there was just racing in the spring and back end. Now it's a big job to get the track back in good condition between meetings."

Summer means long hours, often from 7am to 10pm or later, for the three-strong team headed by Donald, while winter means lots of maintenance work around the racecourse itself and the stables, and going out to certain Perthshire woods to cut birch for the steeplechase fences.

"We've got a very good team here which makes all the difference and makes the job even more enjoyable."

With thanks to Alison Anderson,
Perthshire Advertiser