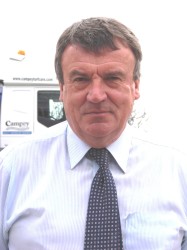 Tony Cundall, General Manager at Campey Turf Care Systems has retired on his 65th Birthday. Tony has been with the company 22 years and has played an integral role in the company during that time

Tony is a well known figure within the trade and with the customers. He originally joined the company as a sales representative covering North Wales, Cheshire and the North Staffordshire area and went on to become General Manager. It is in this position that he oversaw the reception of goods into the yard and was responsible for preparation of all machinery in readiness for dispatch and delivery to the customers.

"In an age when strength of character, loyalty and conscientiousness are not always given the recognition and appreciation they deserve, we are delighted to acknowledge the sheer hard work and reliability Tony has displayed in the past 22 years." Said Richard, "He has never has proved himself to be a loyal and dedicated member of our team and Campeys will not be the same without him. We wish him a long and happy retirement."

Tony was presented with number plates and spare keys to his works vehicle at the Campey 25th Anniversary party on the 8th July and his wife Dinah received a bouquet of flowers.