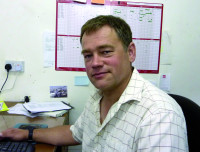 Tony began his career with Bernhard as a 16 year old apprentice with Atterton & Ellis as a fitter/turner. Two years later Tony was in the assembly shop building Express Dual grinders.

Progressing through the ranks at Bernhard - Tony has worked in production, stores and purchasing.

Now Production Supervisor with the world leading grinder manufacturer, Tony has seen just about everything at Bernhard and is thus counted on for identifying parts for older Express Duals still in use.

He counts the company's 2008 Queen's Award for Enterprise as one of career highlights having been involved with the innovation of the Express Dual from its early stages.