0 Tools of the trade:- The Rain Gauge 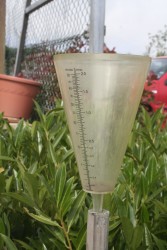 With the dawn of an era of apparent climate change spelling an increasingly erratic future for the Australia's weather systems, the rain gauge is growing in popularity as a tool used to determine when to irrigate or fertilise based upon previous rainfall.

A device conceived to gather and provide an accurate measurement of liquid precipitation over a set period of time, its use on thousands of home lawns across Britain serves as testament to the fact that the many applications of this surprisingly sophisticated instrument are not solely confined to sports fields and golf courses.

Although there are many different variants of the same basic concept, the design of the standard rain gauge (dating back to the early 20th century) makes it a relatively simple device to install. Consisting of a graduated cylinder, often with a funnel attached (usually enclosed within a larger outer case), the need on some models for the cylinder's sub ground level location is the only necessity that could affect the location of a gauge in any area.

It is recommended, however, that a gauge be positioned in an area of open-space to allow for a measurement truly reflective of the extent of any rainfall, while at the same time being relatively isolated from areas of dense population to alleviate the risk of damage by vandalism. A standard rooftop represents an example of a location fulfilling both of these criteria.

The measuring process is pleasantly straightforward, requiring the user simply to remove the graduated cylinder from its ground location and note the figure shown (scales are usually given in millimetres). Care must nonetheless be taken when measuring precipitation levels; the liquid must be flat at all times, with any minor systematic errors often causing annual rainfall figures to digress by several millimetres. Overflow in the cylinder does not pose problems, with any excess rainwater collected in the outer case for later measurement, although open gauges sometimes catalyse the evaporation of water in between measurements.

Extensive ranges of different gauges are available from various suppliers, with attachments such as indoor LCD displays and frost-proof thermometers available with certain models. Although the heightened accuracy of costlier models (maximum prices rarely exceed $500) can make them a worthwhile investment, cheaper alternatives can be purchased from as low as $10. Widely available are also models boasting a novelty theme, designed primarily for garden usage.