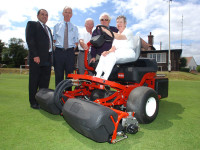 Budleigh Salterton Croquet Club, one of the oldest and largest croquet clubs in the UK, has slashed the time it takes to cut grass after investing in a new Toro Greensmaster 3250-D ride-on mower. The new machine replaced an old, noisy and unreliable unit which was struggling to maintain the East Devon club's 10 croquet lawns, practice lawn and bowling green.

The club is a premier venue for national events and is hosting the European Golf Croquet Championship next year.

"We have a lot of fine turf to maintain and bringing in the new Toro was long overdue," says grounds manager Rob Weeks. "It's packed with features that have brought us significant benefits. It's fast and this means we've managed to reduce our mowing time by 20 per cent. Also, it's easy to adjust, and has a sophisticated back-lapping system that sharpens the blades.

"The Toro has really improved the quality of the turf in a very short space of time and we also invested in a set of groomers to help with turf conditioning. Of course it's much quieter than the old machine, which is a blessed relief for everyone!"

Local dealer Devon Garden Machinery provides the club with back-up and support, and Rob has been particularly impressed with their high standard of service. "They are very supportive and I look forward to a long association with them," he says.