by Charmian Robinson
in Industry News
on 18 Sep 2012 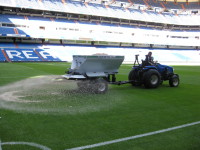 Four of the top Champions League clubs in Europe have switched to the Dakota method of top-dressing their stadium and training pitches.

Mark Trübenbacher, Campey's German distributor, explains why head groundsman Christian Dinauer - in charge of the training complex at Sabenerstrasse, Munich - was so taken with the Dakota 412.

"Players complained about having to 'eat sand' after a tackle," says Mark, "Christian was particularly keen on the fine spread calibrations. The sand only needs a light brushing in after spreading."

The Dakota 412 Turf Tender has a spread width from 3.5m to 13m and features accurate and easy to operate calibration with no manual adjustment.

In addition the Dakota out-classed its rivals for accuracy, width of spread and speed of operation.

Campey Turf Care Systems is one of Europe's largest independent grounds care machinery suppliers, and over the years Campeys have earned a reputation for offering practical advice and superb aftercare service.