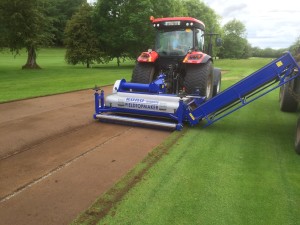 Greenkeepers from all over Ireland turned out to see a dramatic transformation of a fairway at Naas Golf Course, County Kildare, using the Campey Koro Field Top Maker.

Almost 2,000 square metres of fairway was renovated. Thatch and other surface debris were removed from the turf down to a depth of 40mm using the Koro with Universe and Terraplane rotors.

This was followed with sand spread with a Dakota 410 on a John Deere Gator. A Raycam recycling dresser re-incorporated all of the existing nutrients in the soil and a Shockwave 2.2m relieved any compaction to improve aeration.

David Behan, course superintendent explains why he has taken such a radical approach to turf maintenance "Only six years ago, koro-ing was considered a ground-breaking technique in sports turf management terms, now it's become standard practise for pitch renovation. I have watched with interest and have felt strongly that this is something that golf courses could really benefit from."

A recent article on the success of koro-ing on a Swiss golf course at Blumisberg Golf and Country Club Course undertaken by course manager Ritchie Glynn, confirmed David's belief that this is the way forward for effective golf course renovation and course management.

"We have a 60-year-old fairway which suffers from severe thatch. We installed new drainage lines using a trencher which has alleviated the surface water and improved the overall aeration and drainage, but I wanted to reclaim the quality of the playing surface."

David discussed possible options including koro-ing with Brian O'Shaughnessy, Product Specialist for Campey Turf Care. "By removing the thatch completely you are taking the fairway back to its original natural state," said Brian "We can then overseed into perfect growing conditions and create a new top quality fairway." 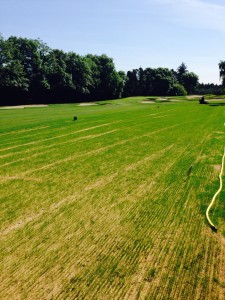 s all about the results," said David, "We have gone-ahead with an initial 2000 metres of fairway using the Koro FTM with Terraplane® rotor and in the space of a day it was completely renovated. It's now twelve days on and I am preparing to give the grass its first light cut. That is an impressive feat."

Finishing touches of the fairway renovation were completed with speed harrows and dragmats to create a perfect level surface for seeding.

"We have also used the Koro FTM with Universe® rotor on three additional strips of the practice area and I am looking forward to see how effective this proves to be in a few weeks' time."

The Raycam Recycling Dresser treated another tee box to demonstrate how you can rejuvenate small areas without expensive applications of turf treatments.

Brian O'Shaughnessy, Campey Product Specialist in Ireland was delighted with how the day went. "Not only did many professional greenkeepers take time out from their busy schedules to come and see the work we were doing, we had a large number of FAS/SOLAS students visit on set-up day, while we koro'd, recycled, levelled and re-seeded a tee box."

"This gave us an opportunity to spend time with interested youngsters and to explain why these practices are so important to anyone involved with or wanting to become involved with turf management."

The Naas Greens Committee were very impressed with the work declaring that they had never seen such dramatic undertakings on a fairway and were eagerly anticipating the finished results. By only koro-ing parts of the fairway at a time it is possible to keep the course in play during the work.

"It's been a fascinating exercise. If the results prove as conclusive as I think they will, we will be looking to introduce an on-going rejuvenation programme across the course in general." 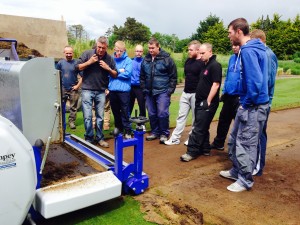 Campeys thanked Mark Harris Turf Improvements (contractor) for help and loan of tractors and the shockwave and also Jim and Noel Sutton from Landcraft for demo-ing the Air 2G2. The professional advice from John Kiloran of Cropcare on the seed cultivars that were used - a 70% rye grass and 30% fescue mix, was also appreciated.

Naas Golf Course will now benefit from a newly-renovated fairway with the turf in prime condition. With the professional care and maintenance of the Naas greens staff it will remain in top condition for years to come.

David Concluded "We will continue monitoring the renovation and update you over the coming months."