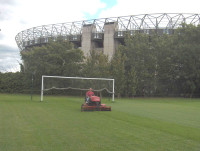 A groundsman at a prestigious London school has reported outstanding results after using British Seed Houses' A20 Ryesport seed mixture on his pitch this summer.

Martin Sampson is responsible for maintaining sports pitches for the Cardinal Vaughan Memorial School at its sports ground which lies in the shadow of Twickenham Stadium. He is also a judge for the FA/IOG Groundsman of the Year awards and won the award for the London and South East region himself in 2006.

After three years of using Rigby Taylor's R14 on his first pitch, he decided to try another premium sports mixture in order to obtain better results. He chose A20 Ryesport from British Seed Houses after consulting the STRI listings and hearing about its use at Southampton Football Club. A20 is a blend of four perennial ryegrasses which provides rapid establishment, wear tolerance and superb winter colour.

The pitch was sown in April during a period of exceptionally dry weather. At that time there was no irrigation on site, but the dry spell was followed by several days of persistent rain, then three weeks of good temperatures.

"The seed germinated evenly and the colour is superb, better than ever. You can see the difference instantly. I've also got good, strong, deep roots," he enthused.

"The grass stands up and it's healthy. I kept the cut at 1¾ to 2 inches until it was established - now it's maintained at around 30mm by regular topping with my Toro ride-on and a 32" Dennis in preparation for matches. We had an irrigation system installed at the ground in July - 17 pop-ups on the first pitch and stand-alone mains in the middle of each of the other three pitches. Quite a lot of time had elapsed before I got the seed down in the areas where the trenches had been backfilled but I incorporate Zeba moisture-retentive granules into the profile to give the seedlings a boost of moisture and nutrients before seeding as normal. Now, you'd never know where the trenches are, they marry-in with the rest of the pitch perfectly."

Martin has been particularly impressed with the new sward's ability to recover from Leaf Spot. The disease emerged in October after wet and humid conditions. Instead of applying a fungicide, he applied a fertiliser with additional iron to harden up the sward. A week after application the disease was barely visible and within 10 days, it had been eradicated.

Now, half way through the football season and mid-way through a wet winter, the school's pitches still have superb ground cover and a rich green colour.

The other three winter games pitches at the ground are often used by the RFU for car parking when Internationals are played at Twickenham, so their maintenance is particularly challenging. Martin plans to fraise mow his 1st team pitch at the end of season before sowing all four with A20.

His results are likely to improve further still, as from early 2008 A20 will be updated to include the new cultivars Gallius and Lucius. They'll blend with Vesuvius which scored impressively for ground cover and visual merit in the 2007 turfgrass seed listings and showed good resistance to red thread. It also excelled in the tests for wear tolerance and fast recovery making it ideal for use on rugby and football pitches with demanding match schedules or where dual sports are played.