0 Top of the Class

Top of the Class 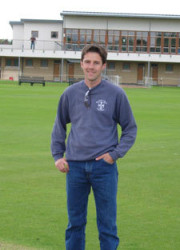 In 2000, the then head groundsman and his deputy at Kings School Canterbury, swapped places. Mark Collins, at 23 yrs. took charge of 8 hectares of sports field built on clay, 8 metres deep, which provides year round facilities for rugby, soccer, cricket, lacrosse and hockey for approx 800 senior pupils. In addition, he was given responsibility for a further 5 hectares of sports field situated on water meadows and serving the 200 to 300 strong junior school.

With a staff of five to maintain the two sports areas, Mark drew up a five year plan of action which was to bring his cricket wickets up to county standard, and elicit praise from visiting teams across the entire sports spectrum.

"My first step was to go through all our maintenance machinery which was about 10 years out of date," recalls Mark. "Everything was either belt or wheel driven and I changed loads of machines. I've always favoured Toro and we went over to hydraulics." Mark also changed his machinery maintenance man for Mobile Mowers Services, a horticultural engineering company based in Chatham, Kent.

"Up until this time the grounds had received little more than basic sports turf maintenance, and aeration, especially on the larger sports field was, and still is a priority. We had to get rid of an iron pan 18 cm down within the clay sub- soil," Collins continues, "and to do this we used the verti-drain." Having dispensed with the pan, the team now aerate every 14 days, 9 months of the year.

"The senior field in particular is constantly being used and mown," explains Mark. "In October we verti-drain the whole 8 hectares. During January, February, March and April we chisel tine with a Sisis machine and in August and September we open up both the senior and junior grounds with pencil tines. From October to the end of the year we revert to chisel tines. The junior field has a different soil structure. It's silty meadowland with the river Stour running underneath, and it floods and drains away quickly. Although our aeration programme on this area is far less extensive than that on the senior field, the wickets are just as hard."

With climate change bringing warmer winters, the playing fields at Kings are cut right through the year with the exception of August if conditions are dry. Prior to the rugby season in September, cutting is less frequent.

Before Mark took over there was no fertilisation programme as such. A fast acting formulation would be applied when it was thought necessary. "We now apply a slow release fertiliser twice a year in February and mid October," he explains. "We scarify the whole senior field in spring, which includes 5 cricket outfields, and over-seed all pitches."

Last year Mark changed his conventional slow release fertiliser for Headland's Multigreen 20+0+32, a six month controlled release formulation that after an initial boost, acts only when the soil temperature reaches the point where the grass wants to grow. "We'd found that our previous product, despite giving a good colour, provoked flushes of winter growth during wet weather," continues Collins. "As we cut right through the year, the clippings were encouraging thatch. We tried using the autumn formulation in the spring but were still getting uneven growth. Multigreen has done exactly what I wanted it to. Growth is more even, the colour remains good and there are fewer clippings returned to the surface which means that, coupled with the use of our new Amazone tractor mounted scarifying machine our thatch has reduced. The grass has more vigour and there is more lateral root growth which helps with wear and tear."

With less thatch, Mark and his team are introducing rye grasses during over-seeding, to compete with the annual meadow grass, which helps recovery at the end of the football and rugby seasons. "Only the goalmouths look worn," he reports "and even they are still covered."

Since taking the helm, Mark has eradicated worms from his pitches. "We used to have so many worm casts that rugby games were a mud bath," he remembers. "Once the casts had gone wear tolerance improved straight away. We also spray to control weeds once a year in October. This gets rid of them until spring when we over-seed, and then there's no room for them."

Although Mark Collins is justifiably proud of the fact that his cricket pitches serve the Kent 2nds., and have played host to the likes of Alan and Mark Eallam during a benefit match for the children of Afghanistan, his next project is to further his own education. Having gained his IOG National Certificate, NVQ levels two and three, spraying certificates PA6 and PA2a, plus the "Black Book" from the Greenkeepers Training Committee, Collins has his heart set on a Masters Degree in Sportsturf and Soil Science from Cranfield University. With Kings School playing fields to his credit he should have a head start.