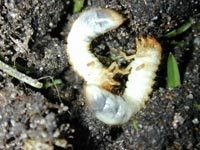 What chemical will control them? (none at present), to Will they harm my children when they are playing in the garden? (no, they are packed full of protein which is why the birds and badgers love them. I've decided that if I could get Jamie Olivier to come up with a recipe we could make a fortune!) Pests in general seemed to cause the most problems last year.

Leatherjacket damage was quite widespread and many people believed they had found a new species that had larvae hatching in spring and adult crane fly present all summer. Tipula paludosa is our most common species of crane fly but there are others such as T. oleracea which tends to be on the wing all summer. This second species may just be becoming more numerous.

Nematode problems also featured at the top end of the list. Queries on red thread mostly consisted of symptoms that were not relieved by nitrogen application in Southern England and advice on chemical control was required. Other enquiries included advice on fever fly identification and control, fusarium patch control (especially integrated disease management) and squidge control. We also had requests to provide information on pearlwort, ants, lichen, anthracnose and general basidiomycetes.

We have recently released a new on-line Turfgrass Pest, Weed and Disease Identification Guide on the STRI website.-www.stri.co.uk