0 Top quality all round for Ladies Irish Open 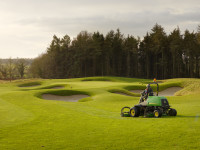 The 2010 AIB Ladies Irish Open at Killeen Castle, Co Meath on August 6 to 8 has attracted the strongest field of women professional golfers in its history. As part of the Ladies European Tour (LET), the tournament is supported by John Deere, the Tour's official supplier of golf course equipment and irrigation products.

As part of an ongoing partnership agreement, John Deere officials are working closely with the LET's agronomists, with the goal of helping to produce better quality playing surfaces throughout Europe. Agronomist Julian Mooney, greenkeeping consultant to the LET, says:

"LET has developed a close working relationship with the course maintenance team at Killeen Castle. Despite the challenging grass growing season, the course has improved considerably over the past month and is on target with preparations for the AIB Ladies Irish Open.

"Killeen will very comfortably bridge the gap between a high quality private members club and a professional tournament venue. I would expect our players to rate Killeen Castle among the top conditioned venues the LET visits in 2010. This year's event will also double as a dry run for tournament maintenance regimes in advance of The 2011 Solheim Cup."

John Deere and the LET extended their original patron agreement at the end of 2009 for two more years. John Deere is an official industry partner of The 2011 Solheim Cup match between the women's professional teams from the US and Europe (captained for the second time in succession by Alison Nicholas), which will also take place at Killeen Castle. The partnership agreement additionally covers the AIB Ladies Irish Open, supported by Fáilte Ireland, in 2011 & 2012, and The 2011 PING Junior Solheim Cup.