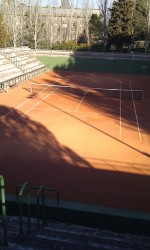 La Moraleja tennis club is one of the most prestigious private members clubs in Madrid. Renowned for its excellent facilities, it currently offers a total of six clay courts, four of which were upgraded in 2010 to Playrite's Claytex synthetic surface, incorporating a natural clay infill.

Claytex is a unique structured needlepunch tennis surface, for use with either a coloured rubber particulate infill or natural clay. This durable tennis surface gives consistent ball bounce and trajectory whilst the inbuilt cushion layer reduces fatigue. Claytex simulates natural clay courts without the high maintenance requirements and is relatively quick and low cost to install.

Fully adhered on installation with the option of inlaid lines available, Claytex is a popular cost effective alternative to natural clay. It provides increased playing time throughout the year as Gabriel Arregui, Director at La Moraleja describes how particularly in the winter months the two remaining natural clay courts aren't available for play. This is mainly because they are prone to freezing and also do not exhibit the same free draining characteristics of the Claytex courts. He explained how:

"With the Claytex surface we can play tennis all year round, even when the temperature drops in the cold Madrid winters. In contrast, this isn't always possible with the natural clay courts as they are prone to freezing and often need to be treated with salt. This was one of the main reasons we decided to change our four natural clay courts to Claytex, including the surface on our centre court facility which will once again stage the Final of an ITF Tournament due to be hosted by the Club in the Summer of 2012."

Mr Arregui went on to describe how players at their club prefer the Claytex courts as there are fewer injuries due to the inbuilt cushioning layer that the artificial clay courts provide. Also, because Claytex has a textured finish, players find the consistency of the surface provides a better standard of play without losing any of the characteristics associated with a traditional clay surface.

La Moraleja has so much faith in Playrite's Claytex tennis surface that they will shortly be converting two more of their old sand filled synthetic grass courts to Claytex.