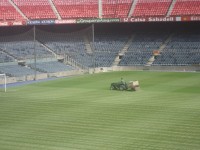 Football Club Barcelona is bringing on sand on the field in the Nou Camp Stadion. After winning 6 - 2 against Real Madrid, the Primera Division title is theirs, and it is now a matter of "cushioning" the players' legs sothat they are maximally prepared for the Champions League final against Manchester United on May 27 in Rome.

The sand is brought on the field with their topdresser Rink 1010, which contains a brush at the rear and throws the sand with accuracy between the grass blades. This is followed by the Verti-Drain aerator, which shatters the sand deeper into the soil.

The pitch becomes more elastic, and thus there is less stress on the bones and joints of the players. The chance of leg injuries decreases considerably.