by Rosie Duckworth
in Industry News
on 08 Mar 2014

0 Topturf is Otterbine contractor of the year again 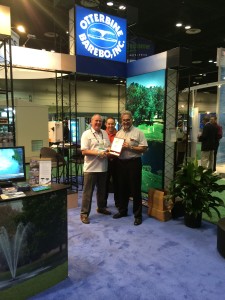 Topturf Irrigation has won the Otterbine Contractor of the Year Award for 2013, scooping the water management specialist's accolade for two years running. The company was also named Otterbine's top UK sales performer, making it a double win for the sports and landscape irrigation specialist.

Based in Ford, near Arundel in West Sussex, Topturf was the clear winner in both categories after another successful year installing and maintaining Otterbine's pond and lake aerators and aerating fountains across the country.

Distributor Lely's Roger Lupton says it's no surprise Topturf has won again. "Thanks to the excellent all-round service the company gives, and the high standards of installation provided by its team of Otterbine factory-trained installers, it's a double win for Topturf.

Last year was another tough one but you wouldn't know it looking at Topturf's sales figures. I can't congratulate them enough on yet another win, and thank them for their ongoing support for Otterbine year after year."

As part of their prize, Topturf won an all-expenses-paid trip to February's Golf Industry Show in Orlando, courtesy of Lely and Otterbine.

Managing director Colin Clark says: "We are delighted to have won this award again, and with it a trip to the Golf Industry Show. Everyone at Topturf worked extremely hard to make 2013 an Otterbine success story, and winning this award was in every way a team effort.

"The show was really interesting," Colin continues. "There are so many new ideas and products coming into the market in 2014 and planned for the future, and it was exciting to hear about it. Lely and Otterbine were the perfect hosts."

Colin and his team are now busy trying to repeat their impressive 2013 performance. "Without doubt our standout installation last year was for Billericay Town Council at Lake Meadow Park, which included a Gemini aerating fountain, two high volume aerators and a Sub-Triton.

It's our intention to repeat our success in 2014. However, there is lots of good, strong competition out there and you can never be sure how things are going to go. We are fortunate to have a 17-strong team and a great product to sell."