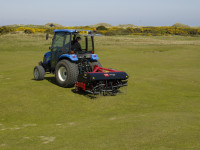 The Toro team will be out in force at this year's IOG Saltex show, with Toro Commercial showcasing its range of professional-performance mowers, utility vehicles, bunker management units, aerators, sprayers and renovation equipment.

Favoured by many of the country's top Premier League football clubs, sporting venues and golf courses, as well as landscaping and local authority groundsmen everywhere, the Toro range is set to be expanded with several new machinery launches at the show.

Expected to be of particular interest is the ProCore Soil Reliever range of deep-tine aeration equipment. Previously manufactured in the US by Southern Green, Toro is confident that this already renowned range will go from strength to strength as part of the ProCore product stable.

The new Groundsmaster 5900 Series range of wide-area rotary mowers will also debut. Boasting cutting widths of 4.9 metres, the 5900 and 5910 models are equipped with an ultra-powerful engine, which enables them to mow at an impressive rate of five hectares (12.5 acres) an hour - that's one whole hectare (two-and-a-half acres) in less than 15 minutes! What's more, Toro promises that the 5900 and 5910 won't be the only additions to the Groundsmaster range to launch at Saltex - the Groundsmaster 4000-D, 4500-D and 4700-D mowers have also been improved for 2009. All three models now benefit from an innovative reversible fan that blows grass cuttings away from the engine grill to guard against blockages, plus a remodelled bonnet to house this handy new feature.

Accurate, efficient and cost-effective, Toro's irrigation products including sprinklers and controllers will also be on show. Making its debut is the new TS90 sprinkler for large-area sports turf applications, such as football pitches. Visitors can also find out more about the innovative new Toro Battery Controller Waterproof (TBCWP), which benefits from several advanced water-saving features and promises to set a new standard for battery-operated controllers. Finally, the benefits of the TMR-1 new Maintenance Remote, which allows a single user to fully operate the system from up to two kilometres away, will be revealed.

Completing the line-up is the Toro Consumer range of Recycler lawnmowers for homeowners, spanning pedestrian mowers like the compact electric Eurocycler or petrol-powered Multicycler to ride-on models for larger lawns, as well as equipment such as trimmers and blower-vacs.