David Magee said: "I wanted the grass cut better, so I visited Eddie Seaward at Wimbledon, who said we couldn't do better than the 1000 because of its 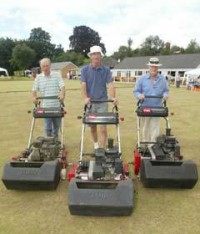 David added. "We cut the courts every day at 6am, so we were aware of disturbing our neighbours, but the machines were incredibly quiet. They cut beautifully and faultlessly, and as a result the courts became progressively faster - the players commented on it. This was due to the quality of the cut and grooming. We've seen huge improvements in the courts already. Full marks all round."

The mowers were supplied through local Toro dealer Handy Turf Machinery, of Swindon.