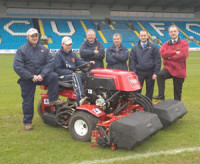 Years of languishing in football's doldrums are over for Carlisle United. The Cumbrian club has turned itself around and secured promotion to the Football League next season after a well-deserved 1-0 victory over Stevenage in the Conference play-off final.

With such a welcome change in fortune, Carlisle is keeping its eye on the ball and focusing on improving presentation at the club's Brunton Park ground.

Ryan Wilson took on the mantle of groundsman after some personnel changes at the club and is keen to make his mark. But at only 20, he is younger than most if not all men in his position and so has welcomed the advice and help of Paul 'Barney' Barnett, head groundsman at nearby Gretna FC.

It was through Barney that Carlisle came to invest in Toro's popular ride-on mower for sports grounds - the Reelmaster 2000-D.

Ryan takes up the story: "Barney offered to lend us his Reelmaster 2000-D to prepare for a match because he said it would do a better job than our pedestrian, and in half the time. He was right. Even after that one cut the pitch looked so much better, everyone commented. And it took us only 45 minutes to cut, as opposed to over two hours with our own mower."

Not long after, Carlisle bought its own machine and the pitch, says Ryan, has never looked better. "It's made such a difference. Before a match we give it a double cut, along and across, and we can achieve those wonderful stripes that look so good," he says. "After a match, we'll divot then run over the pitch with the Reelmaster. It takes no time at all and it's a pleasure to use."

Ryan is satisfied that he's receiving all the help he needs to keep the grass looking its best. "As well as Barney, who is fantastic and like a mentor to me, Toro dealer Lloyds give me all the support I need," he says.