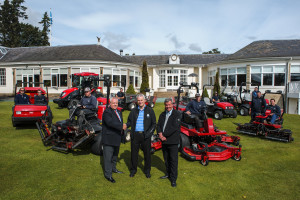 This year's Ryder Cup was a huge success with an outstanding win for the European team. But it took years of preparation, helped by their Toro turf machinery working flat-out behind the scenes, for course manager Scott Fenwick and his greenkeeping team to get the course ready for the Gleneagles' tournament.

The Gleneagles Hotel has been an exclusive Toro customer for the past 10 years and preparations to host The Ryder Cup were years in the making. Extensive changes to The PGA Centenary Course were made on the putting surfaces, bunkers and tees and meeting the challenge of preparing the course to the high demands of Ryder Cup Europe. This involved, says Scott, intensifying the already successful cutting programme at the club.

"The team had to get used to the new course layout and we needed to fine-tune the greens and fairways," says Scott. "But essentially our day-to-day cutting programme remained the same, just intensified. The frequency of pretty much everything increased across the whole course, from cutting, especially on the greens to ensure the speed requested was achieved, to how often we top-dressed the greens.

"Not only did our whole course management regime increase, but other things too. We have a Toro Exclusive Supplier Agreement at Gleneagles and have an extensive fleet of equipment which includes mowers, utility vehicles, aeration machinery and top dressers, as well as now our first TYM compact tractor. For an event as big as this, we needed to add to our machinery fleet, as well as to our core team of 23 greenkeepers on The PGA Centenary Course. They were supported by our King's, Queen's and Gardens teams with a further 40 volunteers and overseas greenkeepers."

Also on this list were three ProPass 200 top dressers for use with the Workman vehicles, a MultiPro 5800-D sprayer and three double and two single TransPro trailers.

Lely's Trevor Chard said: "We all pull together when it comes to helping a club prepare for a major event and they don't get any bigger than The Ryder Cup. We were aware of just how much pressure there was for everything to be spot-on and Lely and Gleneagles's dealer Henderson Grass Machinery worked together with Scott to make sure the club had all they needed to produce and maintain first class greens before and during the tournament."