by Rosie Duckworth
in Training & Education
on 13 Jul 2013 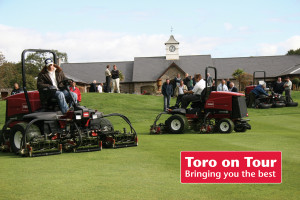 Toro has announced some changes to its Toro on Tour programme of events taking place in October.

The date of the tour event at St Mellion Golf Club, in Saltash, Cornwall will now take place on Wednesday, 2 October. (Previously scheduled for Thursday 3 October.)

A new venue, Millfield School, in Somerton, Somerset has been added to the programme for Thursday 3 October.

Toro on Tour, which began in June, is taking the company's latest machinery launches and expertise to nine key customer venues across the UK in 2013. It's always a big draw for greenkeepers, groundsmen and turf professionals, and this year's tour is already proving a big hit.

Places are limited. But turf professionals interested in attending one of the half-day events can still register by going online at www.toro-on-tour.co.uk