by Rosie Duckworth
in Industry News
on 25 Jun 2013 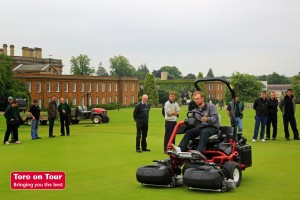 Toro's popular, annual Toro on Tour roadshows are underway again this year. The 2013 programme will see 10 events being held across Britain from June to October.

Organised by distributor Lely UK and its Toro local dealers, this year's roadshows will grandstand Toro's acclaimed greensmowers. This includes all the company's latest launches such as the Greensmaster eFlex all-electric pedestrian model - its quietest greensmower ever - and the new Greensmaster TriFlex 3400 and TriFlex Hybrid 3420 riding units. The hybrid version is Toro's first to feature an all-electric cylinder drive system for a greener mower.

To complete the greens machines' line-up, they will be joined by popular favourites such as the Greensmaster 1000 and Flex21 walk mowers and Greensmaster 3250-D rider. Other Toro turf machinery, including the ProPass 200 top dresser and GreensPro 1200 greens roller will also feature. But, following on from its successful introduction at last year's roadshows, the final list of equipment on show at each event will be decided on what best suits that area's specific working conditions. This way, visitors get to test drive and receive expert advice on machines that are most suited to their own facility's needs.

The tour, always a big draw for greenkeepers, groundsmen and other turf professionals, kicked off earlier in June at Bramshaw Golf Club, at Brook, near Lyndhurst, Hants, before moving on to Heythrop Park Resort, Enstone, Chipping Norton, Oxfordshire. Next up is The Shropshire Golf Club, Telford, on 26 June. The full list of venues is:

Places are limited. But turf professionals interested in attending one of the half-day events can still register by going online at www.toro-on-tour.co.uk