Sandy Reid, links superintendent at Carnoustie Golf Links, was met with an unusual set of circumstances in the lead up to, and during, this year's Open Championship. 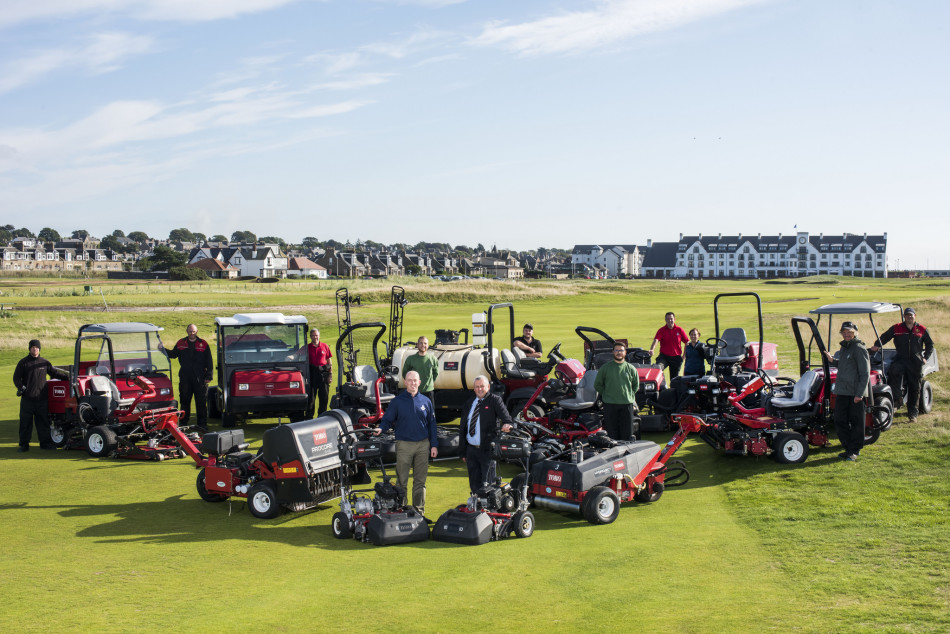 Sandy Reid, links superintendent at Carnoustie Golf Links, front left with Reesink's David Raitt, and the team and Toro fleet which helped prepare the course for the Open Championship, and recover from it too!

The hot, dry spell prior to the Championship had produced the fast-running links conditions many had dreamt of, but the turf was so dry it was barely growing, and vehicles travelling over the course were causing damage.

"We were delighted with the conditions as it shows links golf off to the very best," says Sandy. "But we were also apprehensive because we weren't used to it and we had never prepared the course in conditions like that before. It was just so dry."

So, to give the fairways all they needed throughout the Championship - a gentle trim - the Toro Reelmaster 3555-D fairway mower was perfectly suited for the task.

"We brought in a vehicle and buggy ban inside the ropes for a week in advance of the Championship and for the week itself, and this applied to everyone from the contractors, the TV camera crews, the R&A and ourselves," explains Sandy, who together with Championship Course head greenkeeper, Craig Boath, managed a large team, and support staff for the week.

"The RM3555 fairway mower was absolutely perfect as, with three wheels and slick tyres, we could use it with the confidence that it was not going to damage the turf and as it uses the same cutting units as the Reelmaster 5410 we knew we would get consistency of cut."

As usual Carnoustie produced a fantastically exciting Open with Italian, Francesco Molinari, producing a bogey-free weekend to top a leaderboard stacked with big names. Before Molinari had holed his final putt both Tiger Woods, leading with just nine holes to play for the first time in 10 years, and Rory McIlroy, tied second, had the galleries roaring their approval.

With three courses to maintain, Carnoustie Links have a substantial fleet of Toro equipment from a long-standing agreement with Reesink. But for such a huge championship extra equipment, plus Toro tournament support staff, were brought in for the week.

"It was great to have this equipment ready and waiting even if it wasn't used as much as other tournaments. However, there was rain overnight on the Friday, which created some growth, and having additional fairway mowers meant that we could cut them from one direction, tee to green," says Sandy.

And of course, the work didn't stop when the players and public galleries returned home, then began the recovery work!

"We had the ProCore 648s doing solid tining and mini coring in some of the well-trafficked areas, so we could get some air into them and some seeding done. The HydroJect have also been very useful. We've got a couple of pedestrian ones, but we still have a trailed one which we put on the back of a Workman with some wetting agent in the tanks for some of the barer spectator routes."

Having been head greenkeeper on the Championship course, working under links superintendent, John Philp, at the last Carnoustie Open in 2007, Sandy is well placed to assess the development of equipment in the intervening 11 years.

"I would say that there have been improvements. We've moved to 11-blade units, even on our triples, while we find the latest machines' ability to follow contours and curves, particularly with the Greensmaster TriFlex Hybrid 3420s, so much better. The balance of the wheels and tyres means that you don't see wheel marks to the same degree as you used to. They don't put the pressure on the turf that the older machines used to."

He is delighted with the support Carnoustie Links gets from Toro and distributor Reesink Turfcare, while the quality of the equipment itself pleases not only him, but his team of greenkeepers.

"It is first class machinery throughout the fleet and we have full confidence that whatever task we are doing we will get a great quality finish. The guys all love using it as it is comfortable, understandable and easy to use."

'Rest' is a four-letter word not often heard at Carnoustie and there won't be much of it coming up as the annual Dunhill Links Championship, with its host of celebrity golfers, takes place over Carnoustie, The Old Course, and Kingsbarns, in October.

Nothing to faze Sandy and his team, however, and, with the support of Toro and Reesink, it will all be taken in the Carnoustie stride.