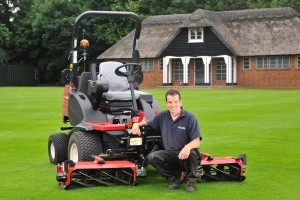 Replacing an older Toro CT2140, head groundsman Chris King says he opted for the LT3340 because he wanted more power to tackle the School's three rugby pitches and cricket outfield.

"The CT2140 has served us well but when it came to upgrading we decided to go for more horsepower," says Chris. "With 35hp and wider cutting units the LT3340 will allow us to be more productive. Of course we had got used to the CT and finding our way around the machine, but the LT is easy to use, too."

Sport plays a major part of school life at Town Close, whose pupils are aged between three and 13, and with three sites to tend it was important the machine was easy to use and transport for Chris and his grounds team of three.

"Rugby and cricket are very important to the school and we maintain these areas to the highest standard possible," Chris reveals. "Toro gives us the quality cut and finish we're looking for as well as being very easy to adjust. The height we cut at for the rugby pitches is different to other areas, so it was important for us to have a machine whose cutting units can easily be changed while out on the field. We've certainly got that in the LT3340."

The LT3340 is one of Toro's hardest working grounds mowers. Built to the highest specification to give the durability, strength and performance required to ensure productive, efficient mowing and a first-class finish, the LT3340 is perfect for a variety of applications. Plus it's roadworthy with a transport speed of over 15mph and, says Chris, "a click lock to ensure the cutting units stay firmly in place while in transit".

Chris finishes by saying: "We knew we wanted to stick with Toro as we've never been let down by them and this is, as expected, another good purchase.