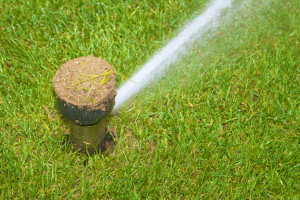 Owned and operated by South Dublin County Council, Tallaght Stadium opened in March 2009, with League of Ireland side Shamrock Rovers as anchor tenants.

With main stand seating for 3,048 and second stand seating for a further 2,899, the stadium may not be the largest in Eire but it has to be one of the most versatile, hosting the Irish American Football League final in 2010, the Ireland versus Scotland 2010 European Cup Rugby League cup and Heineken Cup Champions Leinster as well as Europa League group stages in 2011.

The demands on the playing surface are varied as a result, with the stadium's use by other local football clubs also calling for varied pitch preparation to suit individual club manager demands.

For head groundsman Kilian Byrne, the challenge is not just ensuring the pitch is correctly marked and mown but also watered to match the desired firmness of play.

"When the stadium first opened Kilian could be up all night, dragging hoses around watering the pitch," says South Dublin CC Stadium Manager Nicola Coffey. "It was not ideal, but he managed to prepare the pitch to meet the very varied expectations of not just different sports but club managers too. But we knew we needed a better solution."

The remit was to come up with an irrigation system that could be programmed to apply an even application of water across the entire pitch, with no pooling.

Although irrigation of course plays a vital role in watering the turf when dry, the demand at Tallaght is to ensure the playing surface is just right for the sport being played.

"We don't just mark the pitch out and tell whoever is playing that we are ready for them," says Kilian Byrne. "Our job is to deliver the best playing surface we can, careful irrigation ahead of a game delivering a surface that will take a stud without being too greasy for football or too hard for a contact sport like rugby."

The Toro irrigation system has recently been upgraded to operate with the company's latest T7 sprinkler heads. These pop-up units are fitted with turf caps that enable the heads to rest a good 50mm below the surface where they are completely out of the way both of play and maintenance procedures.

In action, the heads project by up to 145mm from the surface, so enabling each head to evenly irrigate a span of some 14.1m to 22.9m.

"The key is that water is both evenly applied and that the quantity can be easily altered to deliver the surface required," adds Kilian Byrne. "The new T7 heads really do a first class job, eliminating puddling around the sprinkler head and reducing over watering in overlap areas." 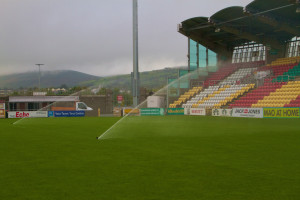 as a Category 4 Stadium as laid out in the UEFA Stadium Infrastructure Regulation.

"We are a community stadium with a limited budget," she adds. "We do not have features such as pitch heating but intelligent irrigation and good management ensures we can deliver a playing surface year round that meets both exacting and varied demands.

The South County Dublin community of Tallaght really has seen a great boost since the Stadium opened, our attention to the pitch drawing more clubs to play here and with it boost the local economy."