by Charlotte Eglington
in Industry News
on 14 Feb 2015 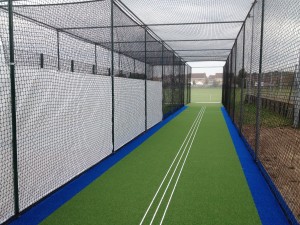 Following extensive research and development into components, the company has enhanced the attributes that have helped make tp365 the non-turf system of choice of hundreds of clubs, playing at all levels, since it originally gained ECB approved system status in 2007.

The new system components have now been tested and approved by the ECB, as MD at total-play, David Bates, explains:

"Sports surface technology is evolving all the time and we never like to rest on our laurels. tp365 was among the first non-turf cricket systems to win ECB approval back in 2007, and it's a tried and tested system that really performs. However, we identified some areas for improvement and we took a step back and reviewed the process to ensure that the system remains at the top of its game.

"The majority of features remain exactly the same - so you'll still get a surface that offers unparalleled stability and balanced play for the modern game. However, there are some exciting new additions that include the option for practice facility carpets to be two-tone green and blue which not only looks fantastic but helps players stay focused, full width shock pads as standard at both batting and bowling ends, extended metal framework as standard on fully enclosed practice facilities and HD 'tunnel' netting as standard for practice systems.

"We are also working with a supplier that exclusively designs and manufactures our carpets and shock pads - so not only will you not find these components in systems from other suppliers, but we have complete control over quality from design through to manufacture. The icing on the cake, however, has to be that the system now comes with an extended, 10 year warranty on the carpets, 30 years on the base construction plus 25 years for our steel framework. The other main step forward is the netting; one of the most overlooked aspects of a practise system but essential for player safety. The Protection Tunnel system with 'HD' netting is the first and only to offer a warranty - and it's not just for one year, but for three!

"We're confident that these developments will ensure that we continue to install more systems than any other supplier and remain the market leader. In addition, we soon will be launching new after-care packages so clubs can have the peace of mind that they system will stand the test of time. This, in turn, will make the system even more attractive to clubs looking to invest in a non-turf facility for match play or practice."

And, in selecting tp365, clubs are not only investing in a system that carries ECB accreditation, but can rest assured it will be installed by a company that has met the ECB's Code of Practice for the Installation of Non-Turf Pitches.