Tottenham Hotspur has been granted planning permission by Haringey Council for its new stadium in north London. 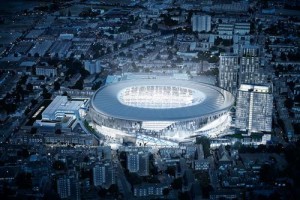 The council approved all three applications submitted by the Premier League club in a meeting that ran until the early hours of Thursday morning (17 December).

Objections had been raised due to the sheer size of the planned 61,000-stadium - which will replace the existing White Hart Lane ground - but the council reached a majority verdict on all three applications.

The vote was seen as the last major hurdle for Tottenham to clear. While the plans must still be formally approved by the London Mayor's office, mayor Boris Johnson has previously expressed his approval for the project.

Last month, the club announced it had appointed Mace to create the pre-construction plans for the stadium, which is expected to be completed by 2018, in time for the start of the 2018-19 Premier League season.

Special design features in the stadium will allow Spurs to host two National Football League (NFL) games each season under a 10-year partnership signed with the NFL in July.

Spurs are also planning to establish an entertainment district around the stadium, with plans in place for a 180-room hotel, an extreme sports centre, a "Sky Walk" adrenaline attraction on the roof of the stadium and a "Tottenham Experience" - a permanent visitor attraction and museum charting the club's history.

There will also be 579 new homes, a new community health centre and improved street infrastructure to better deal with crowd management issues.

Sports architects Populous have been appointed to design the stadium, the hotel and the visitor attractions, while Allies & Morrison will be responsible for the design of the new homes. Donald Insall Associates have been named as heritage architects.