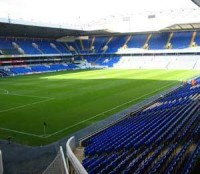 This is the second season of the Desso style pitch at the Lane and although the grass coverage is not as good as last season, the pitch is still performing well and is a vast improvement on the previous styles of pitches at the stadium. Darren was recently asked a series of questions about the pitch at White Hart Lane and the common problems the stadium encounters. Darren is pleased to share these questions and answers with Pitchcare members.

Q: What are you looking for from a pitch, what are you trying to provide? DB: Obviously pitches are prepared with the user in mind and we are mindful of this fact. We attempt to prepare the very best possible playing surface for every match, regardless of the conditions or circumstances. It is important that players enjoy and feel comfortable with their home pitch and this is what we are always striving to achieve. It is, of course, easier to prepare an exceptional surface in August when the grass is thick and the weather better. The skill of Groundsmanship comes in trying to provide a flat, stable pitch for the team to play on in the middle of January, when the weather and the stadium micro-climate are at their worst, when the grass is thinning and the games coming thick and fast.

Q: What are your thoughts on the new Desso style pitch, which you had installed at the start of the 2002-03 season? DB: In terms of 'playability' and drainage, the pitch is performing as intended when the Desso system was installed. One advantage of the system is that you don't get divots, instead a shearing effect takes place. The drainage is excellent due to the coarse nature of the sand - our pitch is 95 per cent sand based - and this was shown at the match here against Aston Villa at the end of November. We had torrential rain for 48 hours prior to kick off, but instead of the game being in doubt, it went ahead and the pitch played superbly. Q: You've mentioned shade and the stadium's micro-climate, are these major problems for you? DB: Every stadium has different climates and we have quite a difficult stadium micro-climate in which to work, with little sun or air circulation in specific areas. Shade is always a constant problem at White Hart Lane, as it is at a number of grounds in the Premiership. Our stadium is superb and the atmosphere inside on matchdays is wonderful, but it doesn't lend itself well to growing grass due to its enclosed design. Stadiums which have open ends or corners will, as a result, produce much better quality playing surfaces.

The south end and west flank of our pitch always suffers more because these areas are in shade longer than other areas of the pitch over the course of a year, while grass needs sunlight to aid survival. Old Trafford has a similar problem, having spoken to Keith Kent several years ago, it was interesting to learn that a study had been carried out on light and shade levels in the Old Trafford Stadium which indicated that from late September through to March it is nigh on impossible to keep grass alive let alone grow grass. We have the same problem, so it means that by the end of October, the grass on the pitch is actually dying and will continue to die until mid-March. With that in mind, we have to try to get the pitch at its peak by October, to allow it to get through to March without fading away too badly. Our grass will be starting to grow again now, so we are over the worst.

Q: The number of matches you have played must also have a bearing on how the pitch looks? DB: Yes, of course. Games obviously damage the pitch and that is just a fact of life for a grounds person. This season between October 26 and January 7, we played 15 matches, but incredibly 11 of them were at home, with a lot of back-to-back games and some went into extra time. Coming as they did during the worst time of the year, these have had a big effect on the pitch and we lost a lot of grass down the middle of the south half in late December. The pitch has still been playing well but aesthetically it is less pleasing to the eye. Matches aren't the only problem though, we are also finding that the intense pre-match warm-ups of some of our opponents are causing considerable damage to the grass and that is something else we are looking to combat.

Q: How do the weather conditions affect the pitch? DB: Obviously torrential rain leading up to a game brings problems, but the biggest difficulty we've had this season has been the high intense temperatures experienced during the summer. You have to remember that grass is a living plant and burns exactly the same as we would if exposed to excessive sunlight. To combat this, we had to over-water the pitch, which brings its own problems with turf diseases. In winter, we have the benefit of an undersoil heating system but this is only used to thaw the pitch and ensure a game goes ahead, not as a management tool for growing grass. It's unnatural to heat grass from the roots upwards.

Q: Can you explain why the pitch is watered before and even at half-time at most of matches? DB: In order to play the style of football that we do, the players need a surface on which the ball will move quickly. The current football that is used in the Premiership and in cup matches has a synthetic coating on it which will actually cause friction between the ball and the grass, causing the ball to stick to the grass as it rolls along and slow it down if it is not wet, so that's why we water the pitch. Obviously during the wetter months the pitch will not dry out and will therefore not require as much watering.

Q: Are you looking at any new products or techniques which could further help your task of managing the playing surface? DB: We are aware of the problem areas and carry out our work diligently with all of this in mind, but we are constantly seeking new ideas and methods to improve the standard of the pitch at the Lane. At the moment we are monitoring the progress of a piece of equipment being trialled by Manchester City, which is basically a system of artificial lighting aimed at aiding the growth of the grass during the months when it doesn't get the required natural light. But whatever methods and equipment we use, our aim is to provide an even better playing surface over the coming seasons.