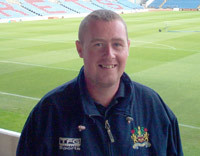 I started my career at Rossendale Golf Club for five years and then had a season over in Germany before returning to the Clitheroe Golf Club back in the UK. I was only there for five months when I received an offer from Burnley Football Club to join as assistant Head Groundsman to Arthur Bellamy, back in 1996. Arthur semi-retired three years ago and now looks after our training ground pitches; I became the Head Groundsman here at Turf Moor.

Arthur comes up on match days still, but enjoys his days at the training ground looking after four full size and two half-size pitches and a synthetic surface. There isn't much money spent on the training ground, so Arthur tends to just mow and divot the pitches there.

I have an assistant up here with me, Aiden McGough, and we are kept busy with weekly training sessions and matches, when we're not busy we help Arthur at the training ground.

When I was the assistant I didn't take in much information, you don't tend to, when someone else is in charge. I just got on with the work that I was asked to do, without always questioning why I was doing it or what its benefit would be. Since I took over, I've had to become far more responsible and I've learned a lot in the last few years. I started to look closely at the pitch and how it responded and began to make allowances to help its progress. For instance it took me a while to get used to a fertilising program. The pitch is sand based and I hadn't realised quite how much the nutrients needed to be replaced.

It has been immense fun learning and I enjoy my work a lot more now. Working in a stadium environment comes with its own problems, the manager for one, who insists on training on the pitch before nearly all the games.

Earlier this year in July, three weeks before our first friendly of the season, I came back from holiday only to find the pitch covered in disease, it was diagnosed as pythium, which I hadn't encountered before. I sprayed the pitch with Fusonil (a fungicide) and applied a high potash fertiliser. The recommendations were not to go mad with nitrogen, and at that time the pitch was still thin and establishing, but I waited a couple of weeks after the disease had been contained before going ahead with a heavier dose of nitrogen. All of the diseased areas were raked, seeded and top dressed again, but before the friendlies there were still some weak patches that hadn't recovered fully. I used the turf doctor and plugged these weak patches with better turf from the side of the pitch.

The pitch didn't look great during the friendly matches, but by the time the season kicked off it was back to its best.

The summer has been hot and dry and to be honest I'd prefer the weather to be like that every year. It's a lot easier being in control of the watering than watching Mother Nature pick and choose when she wants. The south stand here at Turf Moor is very low, probably one of the smallest stands in the league and we tend to get sunlight across most of the pitch all year round. All four corners are open too so there's plenty of air movement to help dry the pitch. It's easy to see why there are problems at stadiums such as Old Trafford with the stadium designs and height of stands as they are now.

I will probably have 50 plus games on the pitch during the season, because we also still host our reserve matches at the ground. I also have training sessions here, usually when the team are due to play away midweek, or on a Friday before a long haul away game. This takes the form of shadow games and seven a side matches. I do my best to keep the players out of the goalmouths but it's not always easy.

I've just re-seeded my goalmouths and top-dressed them, and to keep the players and the pigeons off I've covered them with germination sheets. As soon as I put seed down the pigeons appear and I'm hoping I can get some germination using the covers.

The new pitch was constructed in 1998. The contractor dug down about 250mm deep to the gravel drains underneath, and then built it back up with new root zone, reinforced with fibresand. This has made a massive difference to the work that we do. When I first joined the club before the new pitch, Arthur and I would spend at least two days putting back the divots after games. The old pitch was full of meadow grass and it had a black layer. The root growth was minimal. Now I spend no more than a morning repairing the surface, which enables me to get on with all the other jobs that need doing. Surface damage is now limited really to a few scars and scratches as opposed to the big divots in the old days.

I also have the pitch verti-drained at least three times during the season. For the last few years, I've used a contractor, Richard Campey, to do our end of season renovations. In the last close season Richard stripped off the top 5mm of the pitch with the Koro field maker and also used the Recycler on the pitch as well. As we have disturbed the rootzone sufficiently, I wouldn't aim to verti-drain until at least August time as the season kicks off, however this year I haven't yet had it done, so I'm planning an operation shortly, with another around Christmas and then again in March.

During the summer months, I was fertilising every couple of weeks, generally using 12:0:9 Rigby Taylor mix. This works well and we're changing over to a turf hardener (3:0:3 +Fe) for the winter and a 5:4:20 Microflow liquid feed, in particular the latter will boost the potash, as levels seem to constantly drop in the sand based pitch. I'll also use some 'Magnet', which is a liquid iron to help strengthen the grass plant.

I used 'Systemic' to control the worms, which keeps them at bay. All my spraying is done with a small tractor mounted sprayer.

The supporters club raised the money for my Dennis mower about five years ago, but I also have a good old Ransomes Mastiff

Finally, we have under soil heating at Turf Moor and a Matchsaver rain cover. The Matchsaver cover was purchased after a game was lost against Norwich a couple of years ago. We've not used it a great deal since, because we've not needed to and it can be a pain trying to get it in and out. We were told that the pitch could be uncovered in ten minutes, but the reality is that we often have to have the electrician on standby to help out if the circuit overloads. I also find that when the roller isn't aligned correctly we also need to move it backwards and forwards to get it to go back straight. It's a reasonable system, but you need a lot of staff who know what they're doing to get it working properly.