The secrets behind preparing a golf course for championships

Next time you are standing on the tee of the 18th hole at your golf course, try and imagine this situation. You are leading Tiger Woods by a single stroke in the Masters, and have the honour on the final tee in the last round. You sense the expectation in the gallery closed tightly around the tee, you can feel Tiger's glare burning into your skull as he surveys you going through your pre-shot routine.

The fairway suddenly starts to resemble a green balancing beam, long and narrow, and throngs of multi-coloured bodies line each side, just back from the semi-rough. The fairway bunker on the left looms large in view, like a beacon, calling your ball home. There appears no room to miss. You must commit to hitting a confident, long, straight drive, while your heart pounds and adrenaline races through your veins.

Then, in an instant, switch your mind to playing the same hole one month later, from a forward tee, in a friendly fourball, with acres of space to the left of the fairway and a wide green strip upon which to land your drive.

The differences in the way a golf course is prepared for a tournament and for normal play are enormous, as you will see when you watch any of the television coverage of golf's four Major championships.

It's the job of a tournament organiser and Head Greenkeeper or Course Superintendent to toughen the course for tournament play, but they must be given the tools to work with, and creating the conditions for tournament play is a key part of a golf course designer's role.

Championship golf is usually played on courses that range from 6,400-yards to nearly 7,500-yards. While length is not a critical factor for me, it has become an obsession for many tournament organisers who extend courses so that length is the ultimate challenge for the professional. Good golf course design for tournament play is about more than just lengthening the course and creating par-fours that are par-fives by normal standards.

There are several ways in which a golf course can be prepared for championship golf to create tougher, more testing playing conditions.

Narrowing and hardening the fairways At the British Open at Hoylake in 2006, Tiger Woods navigated the course successfully using a low, stinging long-iron shot from most par-four and par-five tees. He used this tactic because the fairways had deliberately been allowed to harden in the July sunshine, making them fast running and difficult to hold. At the same time, they were narrowed, limiting the landing area, and rough was brought in closer to the edge of the fairways and thickened, to penalise any drive that missed the fairway.

Shaving the greens and aprons, and selecting pin placements At the highest level of tournament golf, the greens are shaved down so that the speeds are extremely fast. When shaved, the green surfaces become firm so that only the best struck iron-shots will hold on them.

The 2004 US Open Championship was played at Shinnecock Hills, Long Island, New York - a hard, fast running links course - where the tournament committee was forced to water the green of the par-three seventh hole during the final round. On and around the green is the area where a golf course set-up will differ most dramatically between tournament and recreational golf. 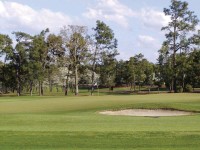 The aprons of the greens will also be shaved tightly for tournament play, creating natural run-off areas, where the ball will roll into bunkers, down slopes, or into water hazards. Usually, the grass will be left longer for regular play, so that the ball holds and an iron shot that misses a green is penalised less.

Pinehurst No.2, in North Carolina, was the US Open venue in 2005, and nowhere is this aspect of golf course design and tournament preparation more obvious. Many of the greens at this famous course are like upturned bowls, or 'buried elephants,' as they are known in America.

Once a ball leaves the centre of the green, it can run off large slopes at the back and side, and force the golfer to have to bump and run the ball back up the slopes to the quick greens. Even Tiger Woods had to play a putt-style shot with his 3-wood several times at Pinehurst when his ball missed the green.

When we design a green complex, we are aware that we need to plan for pin placements of varying degrees of difficulty. It is important the approach to the green can be made either easy or extremely difficult, depending on the circumstances of play.

During a tournament, the organisers and greenstaff will look to utilise the more difficult placements the greens can offer, especially in the final round. This might involve placing the hole on a third tier, near severe slopes, or behind deep bunkering.

In the same way, the organisers can promote low scoring by placing a pin in a bowl where the slopes gather the ball to the hole, like at Augusta National's 14th and 16th holes.

When designing, we aim to create a flexible golf course for tournament play, a course that can be set up for day to day visitor play, but then hardened, tightened and shaped within weeks for a tournament.

Carnoustie is a great example of a tournament golf course. In 1999, the players said it was the hardest Open Championship test they had seen in years, with narrow fairways, deep rough, firm greens and Scottish weather.

Designing a modern championship golf course also requires a designer to think about the logistics and demands of a modern tournament venue. The site will need land for a media compound, merchandise marquees, food halls, grandstands, hospitality tents, practice facilities, and car parking.

It isn't easy to incorporate these elements into a design but they are a necessity of any tournament golf course design.
Next time you're playing, explore your imagination and focus on that narrow picture of the 18th hole at Augusta, the hushed crowd and Tiger breathing down your neck, and marvel at the skill of golf's top tournament professionals.