We also have LTA players from the campus practising on our 6 grass courts throughout the year. The wear and tear is now starting to show on all our courts, which is not unexpected considering our punishing grass court schedule. The courts are open 7 days a week for about 12 hours per day. We try to rotate usage of the courts to minimize damage or maybe implement some repair work or give them a thorough soak. The rested courts have a slight relaxation in cutting height to relieve stress.

Cutting is now a 5 day a week operation during the championships; we are taking leaf fractures off at 7mm. However, after the tournaments the cutting height is slightly raised to relieve stress. Because we can`t aerate during the playing season we try, at times, to leave a little more leaf on a pure ryegrass sward. Mowers are well set as we can`t afford extra stress on the plant by damaging the leaf; ryes are notoriously difficult to cut cleanly due to the bigger cell walls and, if cut poorly, white fibrous stands will increase the change of pathogenic infection.

Over the last week or so I've applied a liquid conditioner to the courts for cosmetic/presentation purposes, this will green the plant up without producing a flush of growth which is what would happen if we applied a feed. However. care must be taken not to overaply iron supplements as this will create an "open" soil which will force the clay particles apart; totally the opposite you`d want on a clay tennis/cricket structure.

I`m also applying a wetting agent once a month, started in April and will finish in August. This will release surface tension and allow the easier passing of surface water, thus allowing also the deeper rooting ryes to establish.

Rolling is now only undertaken if rain has "softened" the courts, as the pre-season rolling has developed the consolidation required. Only the "lighter" roller is used to draw the moisture from the courts. 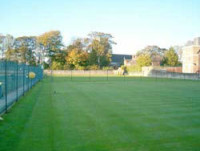 I had a soil analysis taken a couple of months ago which stated a PH of around 5.2 on most court,s which is a bit low for the rye sward. This is being addressed by applying a calcium product in the autumn, plus an organic feed. My worry is if the PH lowered even further which would lock up the phosphate and release aluminium, not to mention the decrease in microbial populations. I`ve looked at my maintenence/management programme and I`m not doing anything such as constant iron treatments and fertilizers to encourage lower PH levels. Fortunately, we don`t suffer from compaction or aneroebic soil structure which would encourage sulphur reducing bacteria and bring the PH down. We are constantly monitoring the situation.

Over the last couple of years we haven`t suffered from pathogens, and I`ve only sprayed once in a year for fusarium. I put this down to all year round management of the courts, the "open" nature of the rye sward and regular organic matter removal. The courts dry a lot quicker and need less rolling. The better air movement around the base of the courts has helped with disease attack.

After the current season we`ll breathe a huge sigh of relief. It`s been extremely busy of late, however it will soon be time for us to start planning for next year.

After 8 years at the club we are now starting to see the benefits of thorough year round management and maintenance. Courts 3 and 4 were relaid around 5 years ago; these had poor levels and needed instant attention. I`m always looking for consistency with the 6 courts, I want similar playing charachteristics so players don`t find much of a difference between them.

All the courts are given exactly the same "centre court treatment" to achieve this consistency. I`ve changed my fertilizer programme this year, from using a controlled release to a straight release. I feel as if I am more in control and not reliant on some prill that is moisture and temperature reliant. I use a liquid foliar feed 12.0.7 that will be directly taken up by the plant and moved transluminally through it.

I`ve also used an organic feed to put OXYGEN into the surface, which is essential with clay structures that have little air movement, it also raises the PH a bit.

The last granular feed applied was in April as this gives enough time for the flush of growth to slow down before the commencement of play in May. The nutrient would increase the leaf`s moisture content, thus producing poor traction. The granular is used in conjunction with the renovations in autumn(Aug/Sep). Aeration is left until around November when there is sufficient moisture in the profile to take a tine.

Aerating around renovation time can cause problems because of the heavier mediums and machinery, play and weather has consolidated the surface, and a tine would struggle to penetrate the rootzone. We continue to aerate around every 2-3 weeks, however it finishes in January as we don`t want the courts to "crack" during warm conditions. Once conditions allow we roll to start the consolidation process. We don`t want the courts to dry out of their own accord as this will create a poor surface prone to cracking once the summer arrives. We also want to release any trapped water in the soil and, by starting light rolling, we create a vaccum effect whereby moisture and air pockets are released when the soil is in a pliable/plasticine state (essential for correct rolling).