0 Tournament Support at The Open 2011

This weekend Royal St George's Golf Club at Sandwich in Kent hosts the 140th Open Championship, the oldest and greatest event in golf.

Royal St George's is one of the world's great links courses, the ultimate in natural testing conditions, and is regarded by many as the toughest of all Open venues. It is also probably the best viewing course for the public galleries - literally the most open of them all.

The superb condition of this challenging course is the result of the hard work and skill of the greenkeeping and other support staff, who are out at the crack of dawn every day to cut the fairways and greens, position the holes and rake the bunkers. Royal St George's full-time team of 12 greenkeepers is led by course manager Graham Royden and his assistant Paul Larsen, and they are supported during The Open by another 10 greenkeepers from other golf courses to cope with the hand and fairway mowing, using the extra machines supplied by John Deere and its Kent based dealership Godfreys (Sevenoaks) Ltd.

The greenkeeping staff always aim to keep the course in excellent condition all year round, but this weekend, they are going the extra mile to ensure Royal St George's delivers the quality of playing surface expected for golf's oldest major tournament.

John Deere and Godfreys are the preferred suppliers of the golf course maintenance equipment used by the greenkeeping team, and provide them with extra support both during the event build-up and the tournament itself. The John Deere machinery fleet includes six 8500 and 7500E hybrid fairway mowers, and six 180C walk-behind greens & tees mowers. All the greenkeepers and John Deere support staff camp out on site, to be available whenever needed throughout the practice rounds and the tournament itself.

As testament to their work, R&A Chief Executive Peter Dawson reported this week: "All the players I've spoken to have been consistent in their praise for the condition and the set-up of the golf course." They include current Masters Champion Charl Schwartzel, who said after Tuesday's practice round: "These are probably the best links greens I've seen for a very long time. I thought they putted really well and the ball rolled beautifully."

There are 15 Open champions in this year's field at Royal St George's, which is staging its 14th Championship. They include defending Open champion Louis Oosthuizen, who famously bought a John Deere tractor with his winnings after last year's tournament, for his family farm in South Africa.

The world's best golfers rightly take centre stage, but behind the scenes at The Open the greenkeeping team works tirelessly to prepare the golf course for its global audience. This preparation started in earnest eight months ago, and the greens staff at Royal St George's have had to cope with particularly harsh winter and dry spring conditions during the long build-up to the event.

"As at each and every Open Championship, the objective is to present a fair, consistent and challenging test of golf in a classic links setting," said Steve Isaac, The R&A's Director of Golf Course Management. "As the official agronomists to The R&A Championship Committee, the Sports Turf Research Institute (STRI) has worked closely with the greenkeeping team at Royal St George's to ensure the course is at its very best and is delivering the true, firm and running conditions that are characteristic of The Open."

The R&A retains an STRI agronomist, Alistair Beggs, for on-going support on all its Open courses. It was his advice that prompted the use of John Deere's lightweight 8500 PrecisionCut fairway mowers over the last three years, to facilitate lower cutting. More recently the course also moved to hand cutting the greens for ultimate accuracy and presentation quality. The 180C walk-behinds now being used mean the greenkeepers are really in touch with the surface, and according to Royal St George's club secretary Christopher Gabbey, the greens have never looked and played better. 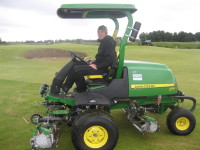 Our stated aim is always to keep the course in championship order," said Christopher Gabbey, who retires after this year's Open - he's hoping for up to 200,000 spectators over the four days of the championship. "I think we can honestly say that since the last Open here in 2003 we've managed to raise the standard of the course yet higher, and our John Deere equipment has been an integral part of this."

Further news and information about the 140th Open Championship at Royal St George's can be found on the official tournament website at www.opengolf.com

When the Royal St George's greenkeeping team found themselves a man short for cutting the Open fairways, John Deere's sales demonstration instructor Craig Erskine (pictured on the 7500E hybrid fairway mower) was invited to join 'the squadron' from the Tuesday practice day right through to the end of the tournament. His initial reluctance may have been more to do with the early starts - the fairways are cut once a day, with the machines ready to go at first light, at around 4.15am!