by Jane Carley
in Multi-sports venues, Rugby, Hockey, and Cricket
on 30 Nov 2020

0 Towcestrians Sports Club: The man with a plan

The current 'situation' may have put many hopes and dreams on hold but, at Towcestrians Sports Club, it's just another minor challenge in the progress of an ambitious development designed to bring several of this Northamptonshire town's sports together and raise standards, whilst enhancing an established community facility. Jane Carley meets the club's Head Groundsman, Tom Waldock, to find out more. 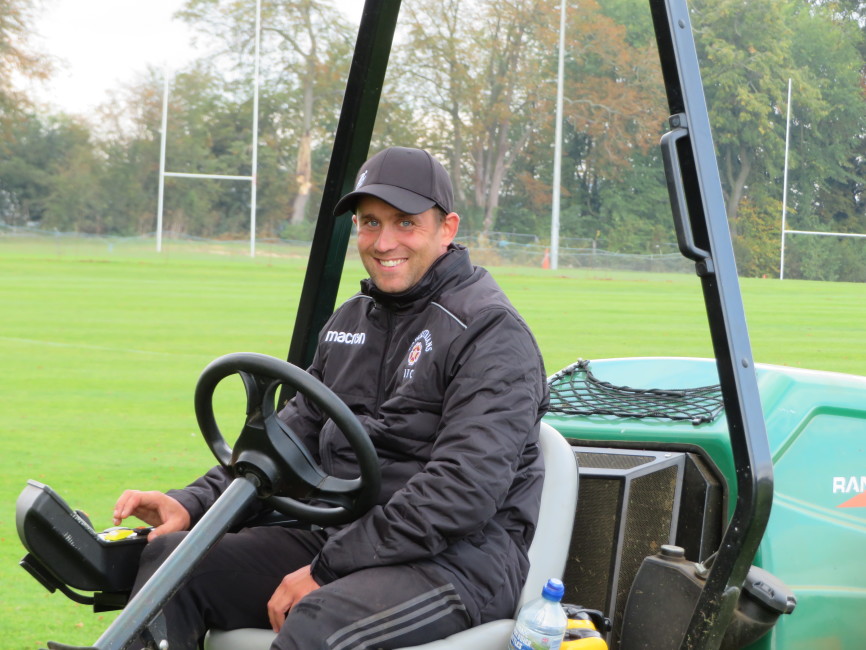 On the outskirts of the town, Towcestrians Sports Club has hosted twenty-five rugby teams from minis to the 1st XV on two pitches, whilst the ground also offered facilities for cricket - the outfield made up from the rugby pitches - tennis, softball and netball, plus a gym in the clubhouse. The local hockey team have played offsite at Northampton for a number of years.

Plans drawn up in 2018 include two more rugby pitches, a state of the art sand filled synthetic pitch for hockey and training, new tennis courts, of which two would be indoors, and for the first time, a dedicated cricket pitch.

When Tom Waldock was recruited from Wasps' Ricoh Arena for the role of head groundsman at Towcestrians last October, the project was still in its infancy.

"I could see it was a tremendous opportunity and the proposals looked exciting. It was also much needed - the pitches were in a poor state from the amount of use they were getting. Together with the committee, I drew up a five year plan for the development and improvement of the grounds, but of course much of it has gone out of the window with Covid!"

Plans that were scrapped included scarifying and topdressing the existing pitches after the abrupt end of the 2019/20 season, although limited renovations were possible. Meanwhile, the two new rugby pitches were constructed and the 3G finished by this summer, allowing the hockey team to come home. 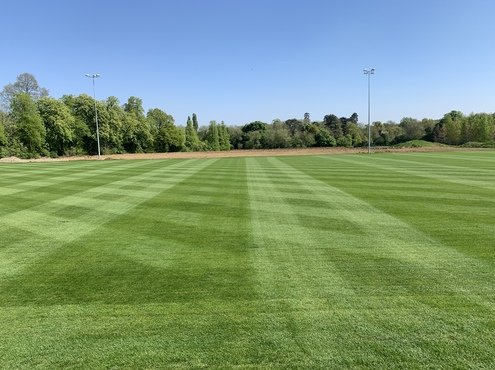 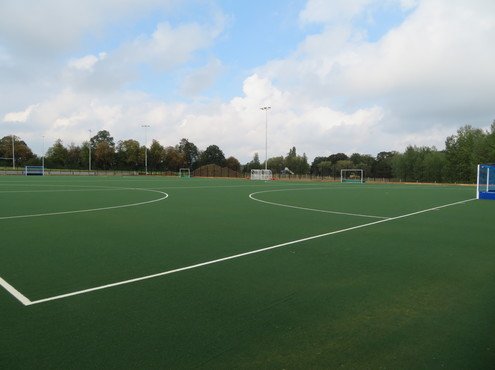 The 3G pitch in development (background) seen from the renovated existing rugby pitches / A new 3G pitch has been recently completed, bringing hockey back to the club after a number of years, but also invaluable for training

"Pitch three will be heavily used for training and, to counteract the clay soils - the fields were originally ridge-and-furrow farmland, a full drainage system has been installed at a cost of £105,000. It will be very useful for taking the strain off the other pitches," he says.

For Towcestrians Cricket Club, a new ground offers the opportunity to move up a level, with its dedicated outfield. Construction has been a mammoth task with 20,000 truck loads of soil brought in to level the undulating land, which will be encircled by a new perimeter road.

Tennis courts are amongst the final pieces of the jigsaw, the three outdoor hard courts relocating to increase car park space and being joined by a new sports hall with two indoor courts. An outdoor gym and 'trim trail' will also be developed, following the site's attractive tree-lined perimeter.

Social distancing measures have brought many changes for clubs as sports have returned to training this summer, and online booking of training slots has produced an unexpected benefit for maintenance regimes, Tom explains:

"Members are required to book a slot for a 'block' of the pitch on which to train, and we will continue this in the future as it allows us to select specific areas to repair or rest. We have some very good IT support amongst our committee and this is one way that it has really helped us."

Major renovations take place in May, straight after the pitch is traditionally used for a popular beer festival (pandemics permitting) and it's a tight schedule before training begins again in June. It looked a little different this year with the first, second and third XV plus the Colts playing forty-five minute socially distanced slots before a fifteen minute changeover. Youth and ladies teams started training in September, so even without fixtures, the playing surfaces will have seen plenty of action before the winter sets in. 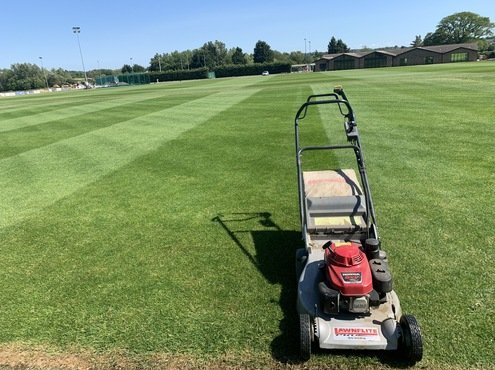 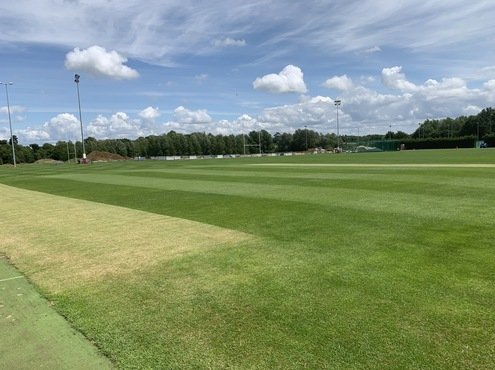 Rugby pitch currently becomes cricket outfield for the summer / The existing square, overlapping pitches one and two, gets some end of season renovations

"There's a strong commercial side to the club's activities so, in a normal year, beer festivals, events related to the British Grand Prix at Silverstone, summer balls and a bike show all take their toll on the turf, but we built in a renovation fee to the hire so repairs are accounted for," he comments.

Budget cuts this year meant the plan to scarify to help rye establishment - the pitches are about 40% poa - was put on hold, but Tom was able to sow fifteen bags of MM60 in four directions, use 6:12:6 preseed fertiliser and put on 'lots and lots' of water.

"We use a Roll Cart sprinkler which takes twenty-four hours to water the pitches, so I was coming in three times a day, seven days a week to relocate the cart in the hot weather," he says.

The move to MM60 was inspired by the impressive results he had seen at the Ricoh, whilst the cricket square - a new sport for Tom, previously a rugby and football specialist - is reseeded with MM50.

"A dedicated outfield will make a big difference to cricket renovations, although we were lucky this year, by the time play actually got started, the new seeds were grown in and ready!"

The fertiliser programme is drawn up with Mark Allen from Agrovista Amenity, starting with Sierrablen at three month intervals, then a Maxwell Premier product mid-season. 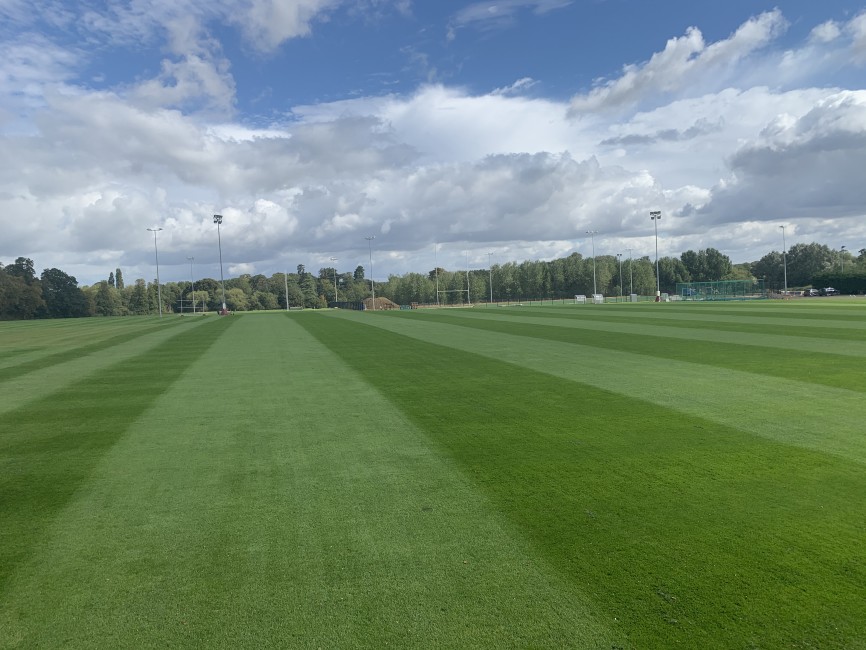 After renovation, the main pitch looking green and healthy

"It's very economical but gives a really quick green up," Tom comments.

Aeration is also key, currently carried out every six weeks.

"We've got our own Blec Groundbreaker but, whilst we await delivery of our new Iseki tractor, we're using a local contractor with a 2.2m Verti-Drain - he's a sponsor so we get good rates!"

Before Tom arrived at the club, much of the grounds work was done by volunteers, backed up by contractors, but the expansion of the facilities made it more viable to invest in a full-time groundsman and equipment.

"My first task was to put together a budget for the equipment and materials needed and draw up detailed requirements," he explains. "The committee have been forward thinking in accepting the recommendations, which will, in time, be paid back by the extra revenue that we can get from the facilities - the 3G pitch alone offers huge opportunities, and we've already got strong links to organisations such as schools wanting to hire them."

Investment in machinery includes a Ransomes TR320 cylinder mower, intended just for the pitches but currently doing duty across the grounds.

"We have had a change of policy on tractors, swapping from a higher horsepower unit to a smaller, lighter 46hp Iseki compact that can be used on the pitches, but will still be capable of pulling the Groundbreaker, plus a topper that can offer higher workrates on the outfields. But, until the Iseki is delivered, I've been putting in about 40 hours a week with the Ransomes!" 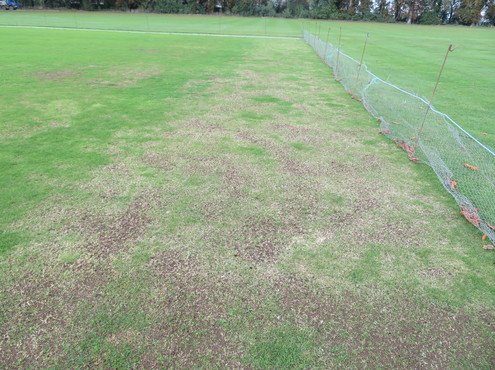 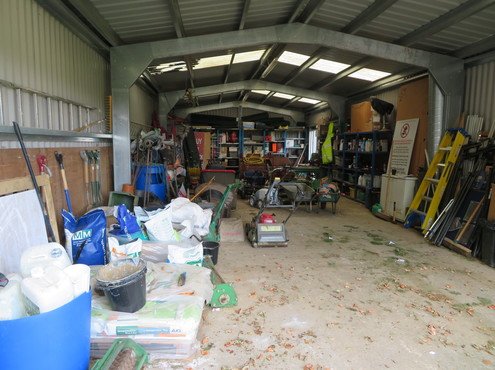 Cricket renovations 2020 / The shed, soon to be filled with lovely new kit!

A second hand lawn tractor is also on order to tow maintenance machinery for the 3G pitch - a dragmat, Sisis SSS 1000 sweeper and triangular brush.

Marking out is another big job with up to four full size pitches or seven smaller pitches and five or six training areas.

"Once we're up and running there's less mowing to do, so I can string up a pitch and mark out in four or five hours."

It's a substantial workload, and Tom is assisted by two volunteers who have been involved with the club for several years.

"It's a big change for them, but they have been very keen to help; I've also been offered an apprentice, but I'd struggle for time to train someone at the moment."

With nothing on the calendar until January at the earliest, Tom is under no illusion that 2021 budgets may also take a hammering.

"We may lose out on topdressing and scarification once again, but I've emphasised that seed, aeration and selective spraying are a must, and the committee fully supports me. I know some groundsmen have issues with committees but, if you can explain your reasoning and point out the drawbacks of not investing in maintenance, a good committee such as this should always back you."

The ongoing developments would make for an absorbing, challenging job for any groundsman, and Tom comments: "We want to make this the best local sports facility in the county. It's a great project and my goal is to continue to deliver good playing conditions. And, in spite of Covid, my five year plan is not far off track!" 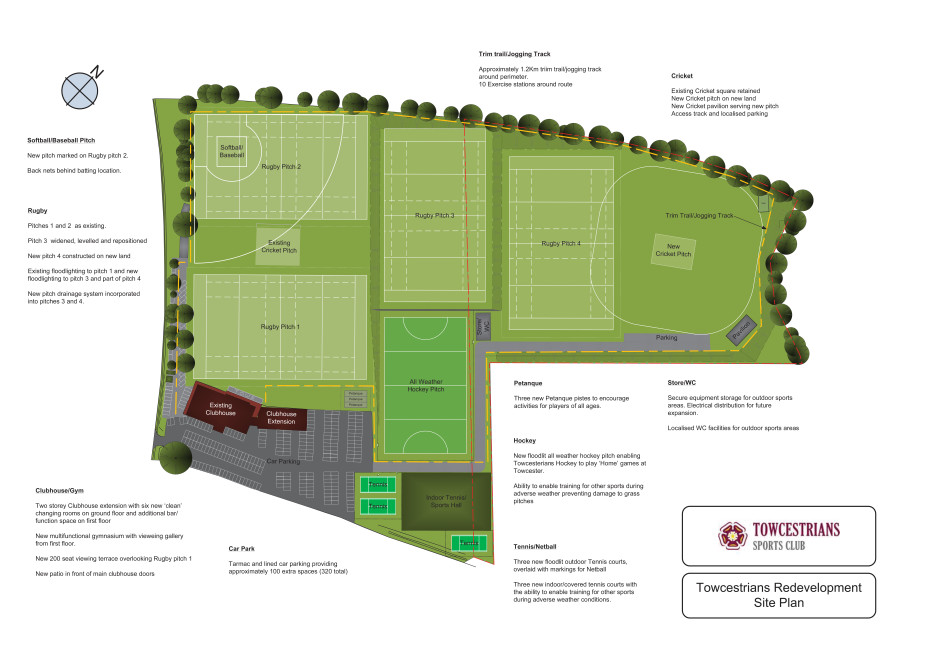