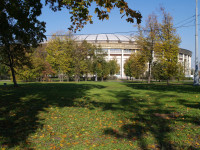 The landmark development will introduce golf to Europe's largest sports centre, venue of the 1980 Olympics and 2008 Champions League Final between Manchester United and Chelsea, and which boasts facilities for more than 40 different sports with five million visits per year.

TPL principal Tim Lobb said: "The golf academy at the Luzhniki Olympic Complex will be an important development for Russia. This will be the closest golf facility to the city centre and will be a family friendly and social venue that will enable the people of Moscow to experience, enjoy and learn to play golf.

"It is a very exciting project to be working on and, with the return of golf to the Olympics in 2016, is befitting of the Luzhniki Complex's vision to be a legacy of Olympic sport."

Among the Russian sports stars who have benefited from the facilities at the Luzhniki Olympic Complex are tennis aces Yevgeny Kafelnikov and Marat Safin. The question is, could Russia's first golf star emerge from Luzhniki's new golf academy?

Dimitry Aleshin, Deputy Director of Development and Commercial Affairs of the Luzhniki Olympic Complex, said: "We were impressed with TPL's proposals for a golf academy and their skills in precisely realising our vision for this unique sports complex.

"TPL also has significant experience taking golf into new markets and understands what it takes to make golf an attractive and complementary choice to the established sports in Russia. We look forward to welcoming the people of Moscow to their first city centre golf academy, at the Luzhniki Olympic Complex."