0 Tractor mowers are just the job 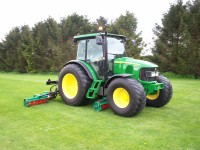 Fabrication work on the tractors was carried out by Howard Marshall Engineering of Papplewick, Nottingham, specifically so that each one could carry new Ransomes Hydraulic 5/7 mowing units. With two of the seven cylinders under the tractors' mid-section and the remaining five units mounted on the rear linkage, the tractors have since been reclassified as mowers and are dedicated to grass cutting.

The adaptation involved removing the tractors' original diesel fuel tank and installing two smaller tandem tanks to enable the mid-mounted cylinder units to be positioned for optimum use. As a result, the total fuel capacity has been increased by around 30 litres, allowing a full day's work to be completed without needing to refuel.

"We bought both the tractors and the mowers to replace older machines at the end of their working life, and they make a great combination," says contract manager Steve Cooper. "Our recently renewed contract with the council covers the whole of Leicestershire and the inner city, and means the new machines are covering a lot of ground. 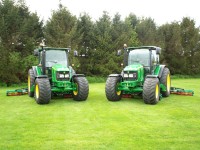 "We have to cut around 1 million m² of grass a week at 400 sites altogether, including 200 schools and other education sites. That's a lot of grass, spread over a wide area, so we can't afford to have the tractors going back to the depot all the time to refuel, we need to get a full day's work from one filling.

"Since using the new tractor mower combinations, we've found that productivity is up and fuel costs are down. They are also more compact and manoeuvrable, which is of particular benefit when they are working in junior schools, which have smaller playing fields.

"John Deere tractors have been a part of our machinery fleet since 1990, and we have established a good working relationship with Buckles over the years, as they are the nearest dealer to our head office and main workshops," adds Steve Cooper.

"We chose the 5090R tractors for this new contract after trying out two or three other makes to go with the mowers, but none came up to the same quality level we've come to expect from John Deere - the tractors are very powerful and comfortable, which is particularly important to the operators, and the productivity and finish of the mowing units is also far superior to our previous mounted gangs."