A Hertfordshire Head Greenkeeper has seen his 18- hole parkland course televised, less than three years after being advised to dig up his greens.

Neil Faubel, who joined East Herts. golf club in 1988 becoming Head Greenkeeper in 2003 has watched conditions on his traditional, clay based, push-up greens
deteriorate over the years. "When I took over most of our greens were poor quality putting surfaces," he says. "They were not rooting and had poor grass coverage. We couldn't get through a winter without heavy attacks of fusarium and each spring we had a weak grass sward as a result." 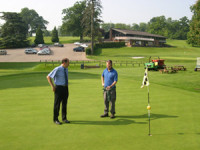 During his first year in the new job, Neil stepped up the aeration regime. "There was a root break four inches down on the sand layer because the roots didn't want to go into the clay beneath," he continues. "We did, and do, a lot of aeration and top dressing, pencil tining every two weeks throughout the year when conditions are right."

Having witnessed widely differing approaches by the two previous Head Greenkeepers, Neil decided to shop around for his nutritional programme. Headland Amenity's Steve Crosdale visited the club and took soil samples from six greens. "Looking at the results, the soil had a very high sulphur content, a very high iron content, and was low on all the major nutrients," he says.

"Based on this evidence I put together a reduced sulphur programme for the whole year, and with Neil's approval, suggested Multi K mini prill (13+0+46) as a spring starter applied at the end of March, followed by Greentec Organic (10+0+6) applied at the end of April. During the summer we switched to Trisert K.S. Liquid (15+0+12) mixed with Seamac seaweed extracts as our main feed, applied once a month with the last application in August."

Given the history of winter disease problems, Crosdale felt that rather than stop feeding the greens in autumn, which had previously been the case, the sward needed to be strengthened. "At the end of September we applied Multigreen Mini (12+0+44), a controlled release, high potash, low nitrogen formulation, backed by Liquid Turf Hardeners applied in equal proportions in October, November and December." Soil samples are regularly taken in February when fertiliser content should be either non-existent or minimal, with leaf analysis carried out in June/July.

Meanwhile Neil was being advised by various turf consultants to dig up his greens.

"Last year the club were going to dig up four greens and start again which would have cost us around £100,000" he says. "I found that following our new autumn feeding regime the grass stayed in leaf until January or February and as time went on Fusarium was less of a problem.

The greens have improved year on year, scaring has grown out over the winter and in spring we've had no marks which meant no over seeding. We've also gone into the winter with better grass quality. I'm not saying this would work with everyone - every course is different, but this year for the first time our club chairman has received letters praising the course."

At the beginning of July, East Herts. Golf club hosted The Western Homes PGA Three-Day Event, which was screened by Sky Sport.

For further information on Headland Amenity contact the company on Tel: 01223 597834 or visit their website at: - www.headlandamenity.co.uk