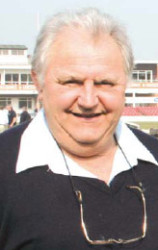 ECB Pitch Adviser for Cambridgeshire, MEL POOLEY, talks about the continuing success of the ECB and the Channel 4 Cricket Groundsman Trailer

Dateline: Cambridgeshire 2003. Things are normally peaceful and not very much is happening on the cricket scene. The groundsmen, mostly volunteer or part time, are going about their business tending the cricket grounds and producing pitches for their weekend games. Most of this fine body of people have very little equipment and very little training on the ins and outs of producing cricket pitches.

Traditionally, in this county, cricket groundsmen are from an agricultural background because they have some knowledge of soils and of growing crops, and are able to pass this knowledge on to their successors. And so, the cricket groundsman evolved. At this point I must say a big thank you to these people who enabled me to play cricket and have many hours of enjoyment.

Going back to that dateline. In 2003 things started happening in Cambridgeshire cricket which was being mirrored up and down the country. The structure of cricket was changing to give a clear pathway for the development of young cricketers. Included in this restructuring of the game was coaching and grounds or, more specifically, cricket pitches.

The ECB, in conjunction with the IOG, agreed to train a pitch adviser for every county. Each pitch adviser working under the umbrella of their County Cricket Board, which were launched at the same time, to help administer all the changes that were taking place.

The pitch adviser's roll was to set up an effective Cricket Groundsman's Association within their own county to bring club and professional groundsmen together. This would enable bulk buying of loams etc. to help lower the cost of renovations to the squares. It was also hoped there could be a sharing of knowledge which could benefit all.

At this time a deal was made with Channel 4 television who were, at the time, covering domestic Test Match cricket, to fund equipment that would be available to the clubs at the grass roots of cricket. This resulted in the Channel 4 Groundsman's Trailer, equipped with machinery and tools to enable clubs to carry out end of season renovations. A trailer was provided to every county that had a Groundsman's Association constituted under the CCB.

Cambridgeshire received their trailer in the summer of 2005 and training days were organised to ensure the safe use of the equipment. The trailer was quickly booked for work across the county and, in the first year, twelve clubs were able to use the equipment to improve their end of season renovations.

There were some reservations about some of the equipment on the trailer but this was addressed and the associations across the country were able to replace the equipment if they felt the need.

The Cambridgeshire trailer had a very successful 2006 season and was used at sixteen different venues. To make this work it was down to one person taking responsibility for the administration of the trailer, and arranging the collection and return of the trailer to its base. Maintenance was also the responsibility of the administrator, to make sure the equipment was in a good and safe condition.

At the end of the 2006 season the Groundsman's Association committee decided to replace the existing aggressive scarifier with a more user-friendly machine. The decision was taken to replace it with a Sisis Auto 5 machine, which had tungsten tip blades for better wear. It was felt that a deep scarifier was not the right machine for amateur use and, if the thatch was so deep, other methods of removal would be more suited.

Just a thought here. How much thatch can actually be removed by these high-powered machines? Take a scarifying reel for example. The blades are set at approx 20mm apart and the blade width is 3mm so, with each pass, the best that can be achieved is 15% removal. Two passes are as much as would be possible because of the cubing effect of any more passes. So 30% is the very best that can be achieved. Assuming that the work is carried out in dry conditions, as is usually done by operators, and a blower is used for removing the debris some of the thatch is blown back into the slits from where it was removed, so considerably less is removed.

With the machinery fund making money available for equipment, Cambridgeshire Groundsman's Association decided that a second trailer of equipment would be of huge benefit to clubs in the county.

An application was put together and was granted by the ECB. The second trailer was available for the 2007 season. Both trailers are now equipped with Sisis Auto 5 scarifying machines with brush attachments for cleaning off the debris. Both have Groundsman Pedestrian Aerators and Sisis drop spreaders instead of the troublesome spreader on the original trailer.

Both trailers have been working flat out around Cambridgeshire and are now embedded into the end of season renovation programme throughout the county.

A fee is charged for the use of the trailer and this money is used for maintenance of the equipment. Any surplus money will go towards any other equipment the committee thinks would benefit clubs in Cambridgeshire.