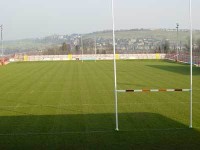 The club, too - now Batley Bulldogs - has recently gone through a major shake-up, with new playing and coaching staff drafted in to help bring back the glory days.

Batley won the RL Challenge Trophy three times in the first five years of the tournament's existence - in the heady spell between 1896 and 1901 - but silverware has been hard to come by of late. Only a brief spell in the 1990s brought any success, crowned in 1998 by victory in the Trans-Pennine Cup, promotion to National League 1 and a runners-up spot in the Alliance Challenge Cup.

Keeping the main playing pitch in pristine condition is as much a matter of pride as the winning of further honours, typified by the dedication of stadium manager Jim Morley. He is responsible for the maintenance of the playing area and additional half acre of grassland. He took on the job three years ago and he describes himself as his own worst enemy, since "the better the playing surface looks, the more people want to play on it". In one three-week period of frenzied activity, the pitch had to withstand the demands of 12 finals, two league matches and training three nights a week." It puts a lot of pressure on us," he admits, "but you have to be prepared to keep pace with what's happening, and having the right equipment is vital.

"We have a SISIS Quadraplay single pass maintenance system. This has a mounting frame to which up to four implements can be attached at the same time. This might be a spiker slitter to ensure the ground is well aerated, grooming rake, roller and a sweeper to collect the clippings."

He would like to invest in a new pedestrian cylinder mower with a 36-inch cut to replace an ageing 30-inch mower, and looks likely to make his final selection at this year's IOG Saltex show (7-9 September, Windsor Racecourse, Berks).

Jim Morley describes the show - Europe's leading exhibition for those involved in open space management - as the ideal venue to keep track of the latest products coming on to the market." It is an excellent exhibition," says Jim Morley, who attended last year's show. "What I like about it is how you can see much of the machinery working and, price wise, you can pick up some bargains. I've never see anything like that on such a scale."

Jim purchased a lawnmower and strimmer at last year's show, but felt that the one day he spent there wasn't enough. "This year, I think I will spend two days at IOG Saltex. There's so much to see."