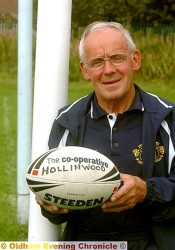 Oldham rugby stalwart says he feels like quitting his beloved sport after another "pitch invasion" by travellers.

"I've been involved with the club since it started in the eighties," said Fred, who is also the groundsman and helps out with coaching.

"My wife, daughter and granddaughter are involved but this just makes you wonder whether it's all worth it. I went down to speak to the travellers to ask how they managed to get through a padlocked gate and I just got abuse and threats.

"We've suffered a lot of vandalism over the last few years, it just seems never-ending."

Fred is hoping the pitch, renowned as one of the best in Oldham and used by teams across the borough, isn't too badly damaged. Bbut he fears it could be a while before they manage to get rid of their unwelcome visitors.

"The council is dealing with it but a court order to move them can take weeks," he said.

A spokesman for Oldham Council said: "An officer was due to attend the site with police to serve an eviction notice on Monday to move the travellers on within 48 hours.